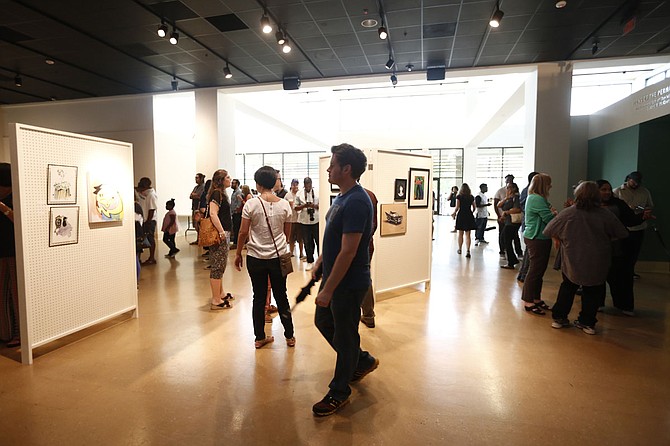 The Mississippi Museum of Art will hold a back-to-school-themed edition of its Museum After Hours event on Thursday, Aug. 15, from 5:30 p.m. to 8 p.m. Photo by Imani Khayyam

The Mississippi Museum of Art will hold a back-to-school-themed edition of its Museum After Hours event on Thursday, Aug. 15, from 5:30 p.m. to 8 p.m. In preparation, the museum is conducting a school-supply drive all week, in which visitors can drop off supplies for the museum to distribute to Jackson Public Schools students and teachers during the event.

The museum will also hold a pop-up exhibition titled "Community Book Illustrations," which Jackson-based artists Robin Martea, Ernest Davis and Imani Smith will host. To accompany the pop-up exhibit, the museum will conduct a Community Book art lab where visitors will work together to illustrate different panels depicting parts of a story and then combine their contributions into a book.

Andrea Jones, owner of the Toot, Teach, and Roll Mobile Learning Center, a travelling learning lab inside of a school bus that Jones refurbished, will also be present at the event.

Artist and author William Dunlap will hold a presentation and signing for his new book, "Pappy Kitchens and the Saga of Red Eye the Rooster." The book is about the late O.W. "Pappy" Kitchens, a Crystal Springs native and friend of Dunlap's whose series of 60 painted panels telling the story of Red Eye the Rooster is currently on display in the museum's Trustmark Grand Hall.

Museum After Hours will also have live music from saxophonist Tiger Rogers, face painting from SnapHappy, a dance performance by Kinetic Etchings and food trucks in the museum's Art Garden, including Taqueria La Reata, Family First, Wheel of Flavor and Kona Ice.

Juan Soto, a Madison resident who moved from Nashville in May this year, opened Bevec's Cafe Simply Delicious (876 Lakeland Drive) in Jackson in June.

Soto told the Jackson Free Press that the focus of his cafe is simple grab-and-go items such as sandwiches, wraps, salads, smoothies, coffee, baked goods and more. Bevec's will also sell a special Fusion Burger that Soto is partnering with fellow Madison resident David Raines, owner of Dave's Triple B and Flora Butcher, to make for Bevec's lunch menu. The burger will consist of Angus and Wagyu beef that Raines sources from Raines Farm which his father, David Raines Sr., operates in Monroe, La.

"I want to keep focused on healthy food above all," Soto says. "We have a lot of medical students and doctors around here who may not always have so much time to eat healthy, so we're to help them come in, grab something good and go."

Soto created the name "Bevec's" from the first initials of his wife, Belem Soto, and their children, Edgar, Valerie, Emily and Christopher, with the final "s" standing for "Soto."

Before moving to Madison, Soto spent 12 years working in restaurants in Nashville, but he had long dreamed of running one of his own, he says. He purchased the building that houses Bevec's, which was formerly a Subway restaurant, from the former manager shortly after it closed.

"There's comes a point where you get tired of just working for other people," Soto says. "I'm not thinking I'll get rich right away or anything, but I'm hoping we'll live better running our own business."

Soto and his wife are also both pastors and opened their own church on the second floor of their building. The church's name, "Casa de Dios, Puerta del Cielo," translates to "House of God, Doors of Heaven" in English, Soto says. He and his wife had previously driven around Nashville every week conducting Bible studies before a friend and fellow pastor recommend setting up their own church in Jackson.

The full list of award winners is available in print in Wine Spectator's current issue, which came out July 16. The list is also available online at restaurants.winespectator.com or via the Restaurant Awards app. The app is available for free and also allows iPhone and iPad users find nearby award-winning restaurants along with information about cuisine, wine and pricing.