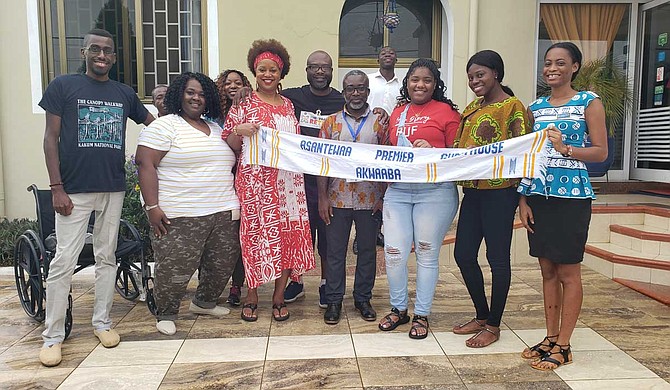 Byron D'Andra Orey, professor of political science at Jackson State University, led a group of JSU students on a 10-day trip to Ghana, West Africa, in June as part of his political science course, "Sankofa: Challenging Racial Mythologies Here and Abroad." The word "Sanfoka" roughly translates to "go back and get it," a release from JSU says.

Orey, who has traveled to Ghana before, chose the country because of its history with the transatlantic slave trade, European colonialism and post-colonial state formation, the release says. Orey's wife, Erin Shirley Orey, traveled with him, along with JSU students Raymond Adams, Toni T. Holloway, Makaiya Smith and Shana Green. 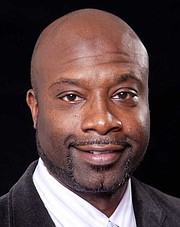 Before the trip, Byron D'Andra Orey assigned his students to read works by authors such as W.E.B. DuBois, Kwame Nkrumah and Charles V. Hamilton, and to visit the Mississippi Civil Rights Museum in Jackson.

The group traveled by plane to Accra, the capital of Ghana, on June 3. The University of Ghana in Accra provided lodging, and Nafis Quaye, a Ghana native and friend of Orey, served as a host and tour guide.

Charles Rush, a JSU alum and regional agricultural counselor in the Office of Agricultural Affairs for the U.S. Embassy, took the students to an embassy briefing and a meeting with the African American Association of Ghana. They also met with Sharon L. Cromer, the United States Agency International Development's director, and went to a reception that the American Chamber of Commerce Ghana hosted.

Orey later took the group on a tour of Ghana's Elmina Slave Castle on the country's southern coast, where slavers kept enslaved Africans in the building's dungeons before transporting them across the Atlantic Ocean. JSU's release states that West Africa was responsible for shipping out more than 6 million slaves.

For more information about the students' experiences on the trip, read the full story here.

The University of Southern Mississippi recently partnered with the Mississippi National Guard to launch the Golden Eagle Free Tuition Program, which will enable members of the Mississippi Army and Air National Guards to graduate from USM tuition-free. University President Rodney Bennett and Maj. Gen. Janson Boyles, adjutant general of Mississippi, signed a memorandum of understanding for the program on Wednesday, Aug. 7.

Mississippi Air National Guard members who are enrolled in the MSNG-State Educational Assistance Program and are full-time undergraduate students qualify for the program, as do Mississippi Army National Guard members who receive Federal Tuition Assistance funds. MSNG members must be enrolled as full-time undergraduate students, meaning they are taking at least 12 semester hours, maintain a 2.0 grade point average and remain in good standing with their respective unit to remain eligible.

MSNG-SEAP will allocate funds to USM for each service student in the program proportionate to the amount other organizations pay at other state supported colleges and universities, a release from USM says. Participants can use the funds with other benefits to maintain a zero-tuition balance. The program excludes distance-education fees and distance tuition above 12 credit hours.

Shaffer has been a member of the MSU faculty since 2008. He is the chairman of the African American Studies curriculum committee, a board member of the Mississippi Humanities Council and serves as a mentor for students in MSU's Judy and Bobby Shackouls Honors College. He researches the social and historical aspects of race in African American and Southern literature, and authors whose work explores racial and identity politics in American culture, a release from MSU says.

In 2012, he won the Ochillo Award for the best published article for his contributions to "The Griot: The Journal of African American Studies."

MSU's AAS program has courses on history, literature, politics, and other aspects of African American life and culture. For more information, visit cas.msstate.edu or aas.msstate.edu.