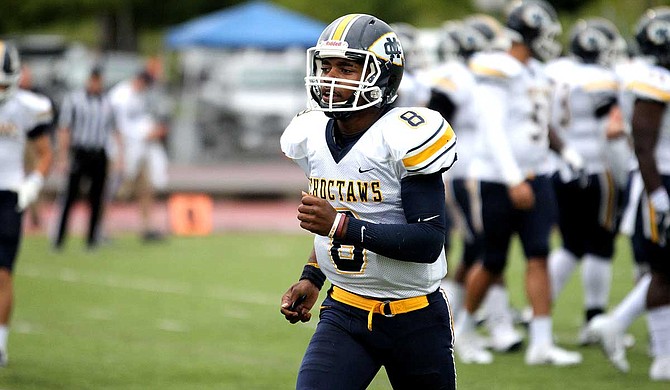 It is not a surprise that the coaches picked the Choctaws to finish eighth in the nine-team Gulf South Conference. This year could end up different for Mississippi College as the team is getting the pieces in place to compete at the Division II level.

One of the major pieces is MC quarterback Detric Hawthorn, whom the conference named to the First-Team All-GSC as an all-purpose back.

The Collins, Miss., native leads the Choctaws' option attack and will be in his second year on offense. Mississippi College ended up as the top rushing team in the GSC last season with 2,661 yards and 266.1 yards per game.

Hawthorn finished third in the GSC in rushing last season with 916 yards and nine touchdowns, which tied him for fourth in the conference and placed him first on the team in that statistic. He averaged 5.7 yards per carry and 101.8 yards per game, which was the second-best in the conference.

Passing is one spot where Mississippi College can improve for the 2019 season. The Choctaws finished last in the conference with 943 yards and just 93 yards per game.

Hawthorn passed for 675 yards with four touchdowns and five interceptions. He did explode for 174 yards passing against the University of West Florida for a season high, along with two touchdown passes.

At Collins High School, the quarterback threw for 7,500 yards and 87 touchdowns in two seasons. Over the same two seasons, he rushed for another 27 touchdowns. Hawthorn joined Mississippi College after spending two years at Jones College, then known as Jones County Junior College. In 2017, he threw for 724 yards with six touchdowns and ran for 394 yards while adding five rushing scores.

Mississippi College opens the 2019 season on the road against Alcorn State University. The game kicks off at 6 p.m on Saturday, Sept. 7. The following week, the Choctaws play their first home game against Albany State University with the kickoff at 7 p.m.