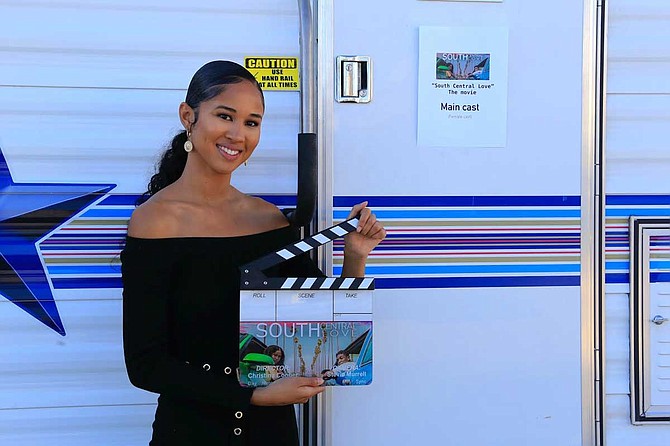 Christina Cooper wrote, directed, produced and stars in “South Central Love,” which will hit select U.S. theaters on Aug. 7 and at Malco in Madison on Aug. 20. Photo by Jason Taylor

When Christina Cooper was 19 years old, her ex-boyfriend, James Boyston, was shot and killed in Los Angeles, and to this day, police still haven't found his killer. His death set her on a path to use the medium of filmmaking to speak out against gun violence.

Boyston's death was not the first time she lost someone to gun violence. Cooper lost some childhood friends as well, and rapper Nipsey Hussle's murder also had an effect on her. She cried while on the phone with a friend after news broke of his death, she said.

"I grew up listening to his music ever since middle school," she says of Hussle. "The most saddening part is how inspiring he was and how good of a person he was to his people."

Through the tragedies, though, Cooper has found a passion and purpose for filmmaking. The 24-year-old director, writer, producer and actress is making films dedicated to addressing gun violence, including "South Central Love."

"I have to use this growing platform," she says."My main goal is to work on something I'm passionate about that will help people, help our humanity, help our world."

Her film, "South Central Love," will screen at Malco Grandview Theater in Madison on Aug. 20 at 7 p.m.

'I Said You Can Do That'

Cooper grew up in Los Angeles with a hectic home life. Her parents divorced when she was young, and it affected her greatly. "There wasn't too much love in my household, so I always tried to get away from that and find love in the streets," she said.

She said she found love in other people and would skip school to hang with her friends. She almost did not graduate from high school, so her parents sent her to Crenshaw Soledad Enrichment Action, an alternative school, with students in similar circumstances.

"The good thing I learned was not to judge people," Cooper says. "I felt more at home there than I felt anywhere else. We had all been through something. It was more relatable."

The school felt like home because people did not judge each other, she said. Her grades improved, and she forged a family with kids who understood what it was like to struggle. While she was working at Fox Hills Mall in Culver City, a photographer and agent came into the store where she worked and asked her about modeling. Soon afterward, she signed with The One Models agency in Milan, Italy, walking in Milan and New York fashion weeks.

A brief interaction with director Tina Mabry piqued Cooper's interest in being behind the camera.

"She's amazing," she says of Mabry, who is from Tupelo, Miss. "Seeing her on set inspired me to get behind the camera. Of any set I've been on, I'd never seen an African American female director."

Soon, Cooper's friends encouraged her to pursue filmmaking, but her final sign came in the form of John Singleton's film "Baby Boy."

"I was watching 'Baby Boy,' and in the credits it said it was written, directed and produced by (Singleton)," she said. "I said, 'You can do that.' I picked up a piece of paper and started writing."

'Make It With a Purpose'

The new filmmaker created her own production company, Christina Cooper Productions, in 2018. The company has since produced the Emmy-nominated daytime drama, "Blue Laces"; the documentary, "If I Don't Make It Home"; and her own talk show, "The Christina Cooper Show."

"Loyalty," a short film, was the first project she released under her production company. The film follows Davonte, a young black man navigating the tough streets of South Los Angeles. He starts to get into trouble after his best friend, Rex, begins influencing him, and he later realizes what loyalty means to him.

The film earned several Oniros Film Award nominations and won an Oniros award for "Best Actress" in 2018. Cooper wanted to challenge herself and get her film out to a wider audience. So, she expanded and revised the script and came up with "South Central Love," a two-hour feature film.

The film is set in Los Angeles and follows Bria (Cooper) and Davonte (Jamal Henderson), two teens who grow closer through trials and tribulations and find that they have much in common. The film features an ensemble of newcomers like Jesselynn Stegall, a Jackson native and Jackson State University alumna, and some familiar faces, like Vanessa Simmons (BET's "Games People Play") and Timothy Delaghetto (MTV's "Wild n' Out").

"The film addresses a violent act and how one attempts to move to the next phase of life while grieving such a loss," a press release said.

Cooper wrote, directed, produced and stars in the film, which was a difficult task for her, she said. In one moment she's in a scene, and the next minute she's directing. It could become too much at times, but she learned a lot from juggling so many roles, she said.

"Just planning, being prepared and not procrastinating, that's what I've learned. Teamwork makes the dreamwork. I have to learn, I can't do everything on my own. Going forward, I don't want to put too much on my plate," Cooper says.

Her motivation for making the movie is to inspire youth to spread love and awareness in their communities, while also mitigating gun and gang violence. She is dedicating this film to Boyston, Nipsey Hussle and other victims of gun violence.

"If I'm going to make my own film, I need to make it with a purpose. It's good to teach kids more knowledge on guns and the effects of them. Coming together, loving each other and uplifting each other will help eliminate everything going on," she says.

Cooper is bringing her message here to Jackson, Miss., on Aug. 20 with a screening of the movie. The filmmaker heard that there are some parts of Mississippi that suffer from gangs and gun violence, so she wanted to bring her message to the youth here.

"With Jesselynn (Stegall) being one of our leads, we definitely have to put Mississippi on the map," she said.

'To Inspire in Any Way Possible'

Filming the movie also helped Cooper heal from her ex-boyfriend's death. Acting has been an outlet to getaway from the world and heal, she said.

"If there's a scene where I have to cry, it helps because there's a lot I have to heal from. All the things I had been through, it makes sense," she said.

She said what keeps her motivated is her family, friends and her community.

"I have to make it because I have a family to feed. I have a community I want to inspire and provide for. If it's ever for self, it doesn't motivate me much," Cooper said.

After the release of "South Central Love," she plans to write another movie and film another season of the TV show "Blue Laces."

She is also meeting with Lionsgate and Disney about future projects.

"I honestly feel like my legacy is to inspire in any way possible. If I don't do anything else in life, I just want to be known for inspiration, for being a good person and doing exactly what I said I was going to do," she said.

"South Central Love" will be released in select theaters nationwide on Aug. 7. A screening is at Malco Grandview Theater (221 Grandview Blvd., Madison) in Madison at 7 p.m. at Aug. 20. Visit southcentrallovemovie.com.