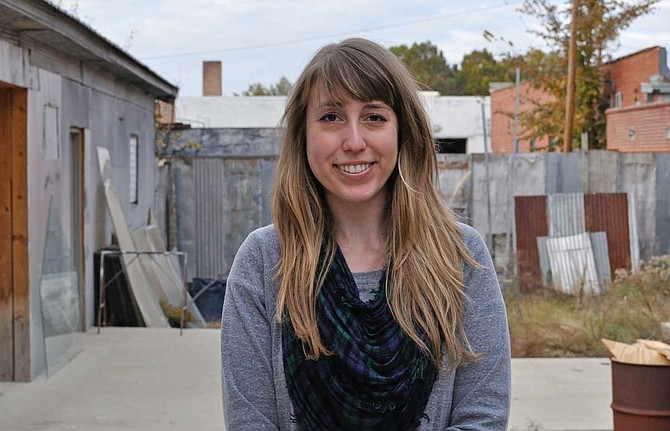 Amelia Key calls her art-making a "process of discovery." She does not really know what the piece is going to look like at the beginning, she says. But at the end of each piece, whether it's one of her colorful sculptures or mobiles, or a print, it always ends up with a musical quality, she says.

"It has a rhythmic quality to it, and it's musical, and the colors have different tones," she says.

The title refers to ostinato, a term in music that refers to a repetitive phrase or rhythm. Her pieces, most of which will be sculptural wall pieces, will have one item repeated over and over again.

"It makes a pattern," she says. "There's a lot of repeated shapes, repeated colors, things like that."

Key grew up in Douthan, Ala., and moved to Jackson in 2007 to attend college at Belhaven University. She received a bachelor's degree in art in 2011.

She began sculpting during college at Belhaven. At first, she thought she would work with paint or pastels because she loves color, but then she began discovering that many objects are colorful. She also does printmaking, often with objects that end up in her sculptures.

Though she grew up doing art, she calls music her first love. She grew up playing piano, and played different types of percussion instruments during college. The thing that first attracted her to percussion?

"There's a lot of colorful mallets and things that I just really like," she says. However, they are too expensive to use in a sculpture, she says.

She was part of a percussion ensemble at Belhaven from from 2007 to 2011, and can play instruments such as a marimba, djembe, triangles and a standard drum set.

In making her sculptures, Key says she begins with the parameters: will it be a hanging piece? Wall piece? Installation?

She makes her sculptures out of everyday objects such as plastic cups, Easter eggs and straws. She will also occasionally upcycle items such as foam curlers or gelato sampling spoons from La Brioche Patisserie.

In putting her pieces together, she often uses a lot of wire. She made jewelry and did wire art in high school, so she's familiar with the medium.

"The flexibility and the tension you can achieve with wire just really appealed to me," she says.

And it can make the objects in her pieces look like they're defying gravity, she says.

While she wants people to have fun while looking at her pieces, and notice the patterns and repetitions, she also wants people to begin to look a little closer at everyday objects, and how much waste we have.

"Ostinato" will be at AND Gallery (133 Millsaps Ave., andgallery.org) from April 12 to May 17. The opening reception on Friday, April 12, is from 6 p.m. to 8 p.m. The event is free and open to the public. For more information, find the event on Facebook.