Of Pirates and Zombies and Sherlock Holmes 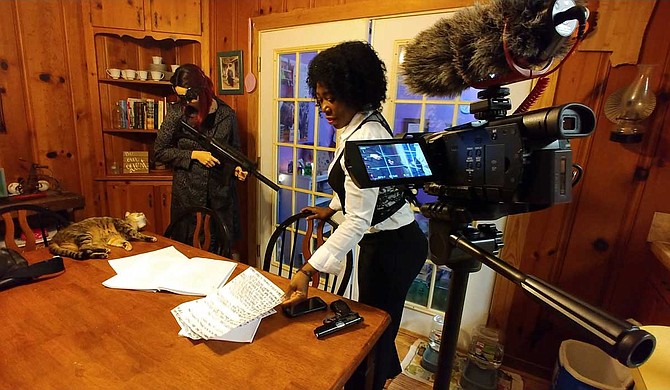 Of Pirates and Zombies and Sherlock Holmes

When the zombie apocalypse came to Ovett, a small Mississippi town, people acted immediately, killing zombies and eventually throwing one of them off a bridge. As all this happened, Curtis Everitt kept his camera rolling. Everitt is the director of photography for Blair Kelly's upcoming film, "Splat," for which the bridge is one of the settings.

"He had police shut down traffic, and so we're sitting there killing zombies on a bridge, and then we had to move cars and let vehicles come by every 15 minutes because the traffic got so congested," he says.

One of the highlights of the day, Everitt says, was when they threw a dummy zombie off the bridge. "(The main character Jerry) is fighting with the zombie, and we're like, 'Alright, put the wig and stuff on the dummy,' and took the dummy (and) fwoop," he says.

Everitt owns local film company Saints Studios Films, LLC. Originally, the Alaska native wanted to be an actor, but after doing that a little bit, he decided he wanted to be on  the production side of the camera.

"A lot of times, actors don't have any control over the movies that they're in, like the quality," he says. "The quality of it, that falls on the director, who's telling the story."

Everitt lived in Alaska until 2002, when he and his parents moved to Mississippi to be closer to family. He received his bachelor's degree in business administration from Mississippi College in 2013.

"I made movies the whole time I was in school, probably when I should have been doing internships... with real businesses," he says, "Me, I'm like, 'I'm just going to start my own business. It's going to go according to plan, and everything is going to be perfect.'"

He originally called his film company Kids Co., but he changed it to Saints Studios in 2008. The business has been an LLC since 2014, but it's only been in recent years that Saints Studios has turned a profit, he says. On the business side, the company does videography for events such as weddings, but then he also makes his own movies. In fact, he just came off a project where he shot 12 movies in 12 months. When a rival filmmaker started talking about making 12 Western-themed films in 12 months, Everitt began to wonder if it was even possible to shoot that many feature films (those that last 45 minutes or more) in a year. He accomplished the feat in early 2019 and has been in the process of editing the films, which he plans to release on Vimeo over the summer.

While Everitt's "12 films" project in 2020 will focus exclusively on Southern films, the genres for the 2018 project varied widely, he says.

For example, in January, he and crew members shot a comedy; and in February, they shot a slasher film in which drones are the killers. He also shot films such as "Dr. S," a film that he calls "every genre of movie."

"It's sci-fi, superhero, everything, it's all rolled into one," he says. "We filmed that from like March to July. Out of all the films we did on this 12, it was the one that we poured the most time into and effort."

"It was my first feature-length script," he says. "I've just been revising it ... until we actually made it."

Over the 12 months, Saints Studios also made films such as "Sherlock Holmes: Bound to the Dark" and a female-led pirate film called "The Brigg."

When it comes to filmmaking, Everitt says his weakest genre is comedy.

"It's so hard to do comedy and find what's funny for everybody and make it universally appealing," he says.

His favorite genre? "Thrillers," he says. For example, one of the other films he made for the 12-films project is "Windows to the Soul," a thriller about a woman who gets a cornea transplant and then starts to see spirits.

"It's supposed to be really creepy," he says.

Everitt says that technology has made filming projects easier, but now, the logistical side can be the difficult part.

"Up-and-coming filmmakers can use their phone to make a movie. The most precious commodity when you make films, though, is time," he says. "People don't realize that."

For Saints Studios' "12 Southerns in 12 months" project in 2020, Everitt says he wants to collaborate with other filmmakers instead of make most of them himself. One film will be a southern adaptation of Romeo and Juliet called "Rome and Julie."

A way to elevate the state's film industry, specifically the independent film sector, is for more filmmakers to work together, he says. He would also like to see more local classes and ways for the creators to publicly showcase their work.

For Everitt, the sheer number of frames per second in film gives creators a greater chance to do something meaningful and to tell a compelling story.

"I was a visual artist for a while," he says. "You paint a picture, draw a picture, show it to somebody, they might look at it and like it or whatever. You write a book, show it to somebody, they might like it. A picture says 1,000 words, and a book has so many words in it, but then you make a movie, you have 24 frames a second for 45 minutes, you have a lot of opportunities to do something cool."