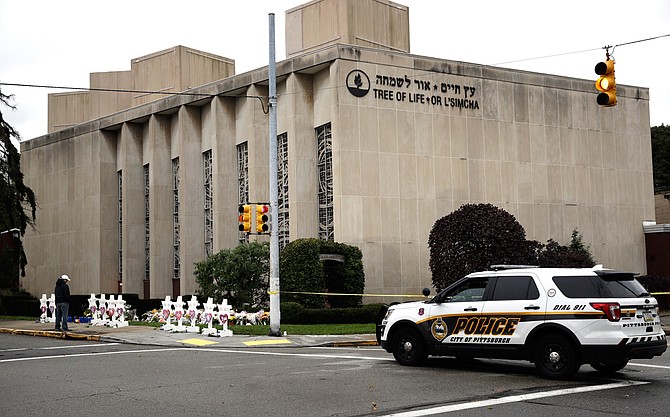 After the Tree of Life shooting on Saturday, Oct. 27, Jackson organizations Working Together Jackson and Beth Israel Congregation are hosting events in solidarity with the Jewish community on Monday, Oct. 29. AP Photo/Matt Rourke

JACKSON — Robert Bowers opened fire at Tree of Life Synagogue in Pittsburgh, Pa., killing 11 people and wounding four police officers, on Saturday, Oct. 27, indicating that his goal was to "kill all Jews."

Here in the metro area, local organizations and leaders are responding and hosting events in support of the Jewish community.

Working Together Jackson held a time of prayer for people of all faiths and a press conference in support of the Jewish community and to call for civility at noon today, Monday, Oct. 29, at Beth Israel Congregation (5315 Old Canton Road).

“﻿The horrible events at Tree of Life Congregation in Pittsburgh yesterday (Saturday) and other recent acts of terror remind us that civil political discourse and healthy civic life can be fleeting and fragile,” the organization said in a press release. “WTJ believes our work is part of the solution to combating the hyper-partisan political climate that is currently dominating our civic life and fostering acts of violence.”

Working Together Jackson is a collective of 35 institutions, many of which are faith-based, organizer Chevon Chatman told the Jackson Free Press in a phone interview before the event.

“We are interfaith, and at this time, it’s necessary for us to come together, for our institution leaders to come together, to support each other in light of what has happened in the tradition that has taken place for decades now,” she said.

Chatman then referred to the bombing of Hebrew Benevolent Congregation, also referred to as The Temple, in Atlanta on Oct. 12, 1958, when a bomb made of 50 sticks of dynamite exploded near the Temple’s north entrance. Afterward, leaders, citizens and local businesses rallied around the synagogue.

“We stood together then, and we want to stay in the same spirit of love and community and all that we know as just,” Chatman said.

At the press conference, public officials such as Mayor Chokwe Antar Lumumba, faith leaders such as Rabbi Jeffery Kurtz-Lendner and community members such as Ronnie Crudup Sr., who flew in from London for the event, came together to talk about the attack on the Pittsburgh synagogue.

Rabbi Debra Kassoff, who is based in Greenville, told the Jackson Free Press after the press conference: "I think in (Mississippi), we actually do a pretty good job of coming together. I'm not originally from Mississippi, and I've been really moved by the public statements and solidarity that have come out of the interfaith community across the state.

"I see it in Greenville (where) we have tremendous support from our neighbors, but there are still deep-seated prejudices and implicit biases and all sorts of ways in which we sit in our individual houses at times, and allow ourselves to say things and think things that contradict the togetherness we have in these heightened moments. And so I think (we) need to do something that's really hard, which is to try to hold onto that awareness that these crises sort of bring us to and try to do more."

Tonight (Monday, Oct. 29) at 6 p.m., Beth Israel and the Jackson Rabbinical Council will host a service of healing and prayer at Beth Israel’s Holocaust Memorial in commemoration of the Pittsburgh attack. Afterward, New Stage Theatre, which is currently performing a production of “The Diary of Anne Frank,” will host a panel discussion called “Anne Frank from Page to Stage and Holocaust Memorialization” in the sanctuary from 7 p.m. to 8 p.m.

During the event, James E. Bowley, a religious studies professor at Millsaps College, will moderate a discussion about memorializing the Holocaust and the events leading up to the Franks family hiding in Amsterdam in 1942. New Stage Artistic Director Francine Reynolds and “The Diary of Anne Frank” cast members will also be on the panel. Admission is free. For more information, find the event on Facebook.

Performances of “The Diary of Anne Frank” continue Oct. 30-Nov. 4. The production is from 7:30 p.m. to 10 p.m. Tuesday through Saturday, and 2 p.m. to 4:30 p.m. on Sunday. For more information, visit newstagethreatre.com or find the event on Facebook. Also, check out the Jackson Free Press’ story on the play

CORRECTION: In the original headline of this story, we wrote that the incident in Pittsburgh was a bombing when we should have said shooting. The Jackson Free Press apologizes for this error.