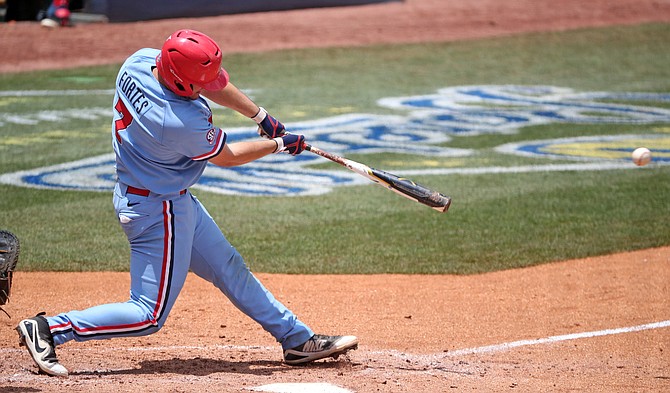 The University of Mississippi had a rough start during the 2018 SEC Baseball Tournament. The Rebels dropped their opener against Auburn University on May 23, losing 3-9. Like most of his teammates in that first game, junior catcher Nick Fortes struggled at the plate with a zero-for-four performance.

Facing elimination, the Rebels bounced back in game two against the University of Georgia the following day, and Fortes scored a game-tying run in the 10th inning, leading the way for UM's 5-4 win. The Deland, Fla., native went two-for-two in batting and drew two walks.

The Rebels got a second shot against Auburn in their next game in the SEC Tournament on May 25. UM pounded the Tigers 7-0 to advance. Fortes went two-for-five hitting with an RBI, a run and a stolen base in the victory.

Fortes opened the scoring in the Rebels' next game of the tournament against Texas A&M University on May 26. UM got two runs in the fourth inning, which was enough to hold off the Aggies for a 2-1 win. Fortes put together a two-for-three day at the plate and scored a run.

The victory over Texas A&M put UM in the tournament championship game against rival Louisiana State University on May 27. The catcher saved his best game for when the title was on the line, going four-for-four at the plate with a two runs, a stolen base and an RBI. The Rebels blasted LSU for a 9-1 win and the tournament title.

Fortes went 10-for-18 hitting with five runs, two RBIs and two stolen bases during the SEC Tournament, which earned him Most Valuable Player. He became the second Rebel to be named tournament MVP and the third player to record four or more hits during the near-weeklong event. He was also named to the 2018 All-SEC Tournament Team, alongside teammates Will Golsan and Thomas Dillard.

Those numbers are considerable jumps from most of his offensive output as a sophomore in 2017. That year, he played in just 44 games, making 38 starts evenly split between catcher and first base. Fortes posted a .319 batting average but had only 44 hits, 32 RBIs, 18 runs and five homeruns, with 67 total bases, a .486 slugging percentage and a .382 on-base percentage.

As a freshman, he played in just 17 games and made only 11 starts. He had a .194 batting average with seven hits, seven runs and one RBI in limited action.

The Rebels, whom various polls have ranked as high as No. 3 in the nation during this season, sit at a 45-15 overall record and 18-12 in the SEC going into the NCAA regionals. UM will also host its eighth four-team regional, this time as the No. 4 national seed.

The regional begins on Friday, June 1, with Tennessee Technological University facing Missouri State University at 2 p.m. UM will face Saint Louis University at 6:30 p.m. The four-team regional is double elimination, and if the Rebels advance, they will host a Super Regional the following weekend.