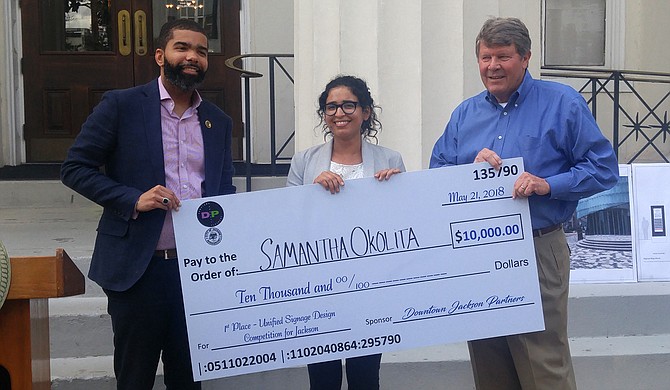 Mayor Chokwe Antar Lumumba presents a check to Salam Rida, Urban Designer with the City of Jackson's Long-Range Planning Division, who is accepting on behalf of Samantha Okolita of Brooklyn, N.Y. Okolita won the Unified Signage Competition. On the right is Ben Allen, president of Downtown Jackson Partners. Photo by Marie Weidmayer

JACKSON — An earlier version of this story misidentified the woman pictured with Mayor Lumumba as Samantha Okolita. The woman pictured is Salam Rida with the City of Jackson's Long-Range Planning Division, who accepted the check because Okolita was not actually present. We apologize for the error.

A New York City woman has won $10,000 for designing a new promotional look for Jackson signage. Mayor Chokwe A. Lumumba announced the winner of the Unified Signage Competition on the steps of City Hall Tuesday, May 29.

Samantha Okolita of Brooklyn, N.Y., submitted the template that the City will use as an open-source design platform for the capital city, Director of Planning and Development Mukesh Kumar said at the press conference. The winner was not present to receive the $10,000 check.

"We are really excited about this," Lumumba said. "We think that we need to demonstrate consistency and some unity as people travel across the city, so that our signage, our aesthetic appeal is all on one accord."

The City will start changing local neighborhood signs as soon as possible, Kumar said. His department is talking with local businesses about sponsoring other signage, including digital map kiosks and banners.

At this time, there is not a timeline for the new signage, but it will be throughout Jackson, not just downtown, Kumar said.

"As we are looking to transform the City of Jackson and take on this radical new direction, we understand one of the most significant changes we must make is a cultural shift," Lumumba said. "A shift that gets people excited about the direction that we're going in."