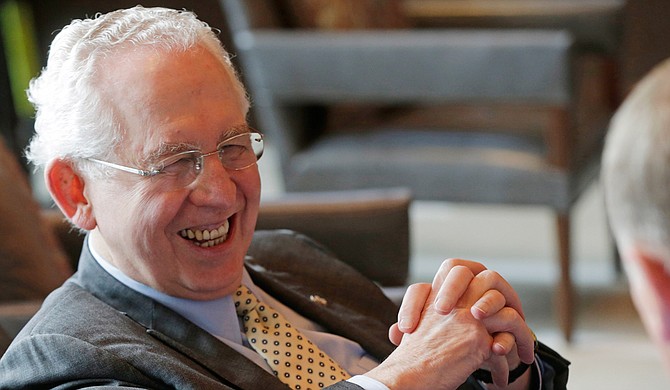 Mike Slive, former commissioner of the Southeastern Conference, died in Birmingham, Ala., on May 16 at the age of 77.

While the SEC has not provided cause of death, Slive was diagnosed with prostate cancer in the 1990s and suffered a recurrence around the time he retired as commissioner in 2015. He continued serving as a consultant to the conference and began the Mike Slive Foundation for Prostate Cancer Research in 2017.

An Ithaca, N.Y., native, Slive received a Bachelor of Arts degree from Dartmouth College in 1962. He earned a law degree from the University of Virginia Law School in 1965 and a Master of Laws degree from Georgetown University Law Center in 1966.

He served as assistant director of athletics at Dartmouth for two years before practicing law and becoming a district judge in New Hampshire. In the 1980s, Slive was assistant commissioner of the Pac-10 and then athletic director of Cornell University.

As commissioner the SEC, Slive took the foundation that his predecessor, Roy Kramer, laid and built what could arguably be the best athletic conference in the country.

Under Kramer, the SEC expanded to 12 league members, and he helped build the Bowl Championship Series. When Slive took the position in 2002, however, nine of the 12 league members were either under NCAA investigation or on probation.

One of his first actions as the new commissioner was to clean up the conference by establishing the SEC Task Force on Compliance and Enforcement, which developed procedures and policies to help member schools follow NCAA and SEC rules.

In 2004, the SEC underwent one of its biggest changes. While it would be unheard of now, the NCAA left an undefeated Auburn University football team out of the national championship game, a snub that eventually led to the development of a playoff system.

The SEC rebounded in 2006 as the University of Florida began what could be an unbreakable record: seven consecutive BCS National Championship Games. In 2007, a two-loss Louisiana State University won the title just three years after Auburn's rejection.

Florida, LSU, Auburn and the University of Alabama all won BCS National Championship Games during the conference's incredible streak. In 2008, in the midst of the SEC's national championship dominance, Slive suggested the idea of a playoff system for the FBS level of college football, but the other Power Five commissioners opposed the plan.

That changed in 2011 when LSU and Alabama, two SEC schools, played for the national championship. Finally, the other commissioners were ready to discuss a playoff format. It became a reality in 2014 with the first College Football Playoff.

The conference developed a Minority Coaches Database to encourage member schools to hire minority football coaches. He also helped establish SEC University, the conference's academic initiative, and SEC Sportsmanship, which makes procedures and policies for players on the field, as well as fan sportsmanship and behavior. Under his watch, the league expanded to 14 teams, adding Texas A&M University and the University of Missouri in 2012.

As commissioner of the SEC, Slive served as coordinator of the BCS, and chairman of the Division I Men's Basketball Tournament and the Commision of Athletics Opportunity, which Secretary of Education Roderick Paige created in 2002 to evaluate Title IX standards in regard to sports. The commission was shut down in 2003.