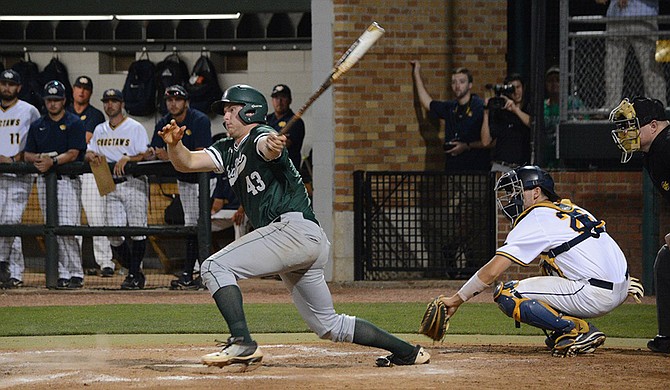 His on-the-field performance during the 2017 season led to several honors, including First Team All-GSC; Gulf South Conference Player of the Year; GSC Tournament Most Outstanding Player; NCBWA, ABCA and D2CCA All-American First Team; the Tino Martinez Award for Most Outstanding Division II Player; and a Ferriss Trophy finalist spot, among others.

This season, Shannon returned and helped DSU to a 40-9 overall record and the regular-season GSC title with a 23-5 conference record. He was selected Preseason All-GSC, and the conference named him Player of the Week five times.

The senior might have been more impressive at the plate this season. With 29 homeruns, a school record, he is currently tied with former Mississippi State University stars Rafael Palmeiro and Bruce Castoria for the most homeruns in the state of Mississippi.

Shannon currently leads DSU, as well as the GSC and the nation, in homeruns at the Division II level. He is also the Statesmen's frontrunner with a .989 slugging percentage, .523 on-base percentage, 184 total bases, 86 RBIs, 79 hits, 71 runs and 14 doubles. He is tied for first in games played with 49 and triples with two.

The 6-foot, 3-inch, 230-pound slugger leads the conference in batting average, slugging percentage, on-base percentage, homeruns, hits, RBIs, runs and total bases. He is tied for 10th in doubles and 11th in triples in the conference.

Shannon leads the nation in total bases, slugging percentage, RBIs and homeruns. He is third in the nation in runs, 10th in on-base percentage and 11th in batting average.

No matter the outcome of the tournament, Shannon has already earned the title of GSC Player of the Year and First Team All-GSC, and made the Golden Spikes Award Mid Year finalist list. He is also a finalist for the Ferriss Trophy for the second year in a row.

The 15th annual Ferriss Trophy ceremony will be at 11:30 a.m. on Monday, May 21, at the Mississippi Sports Hall of Fame & Museum (1152 Lakeland Drive). Hall of Famer Jay Powell is the guest speaker. Fans can vote on the winner at csopavoting.com through noon on Saturday, May 19, and purchase tickets to the event at the museum or online at msfame.com.