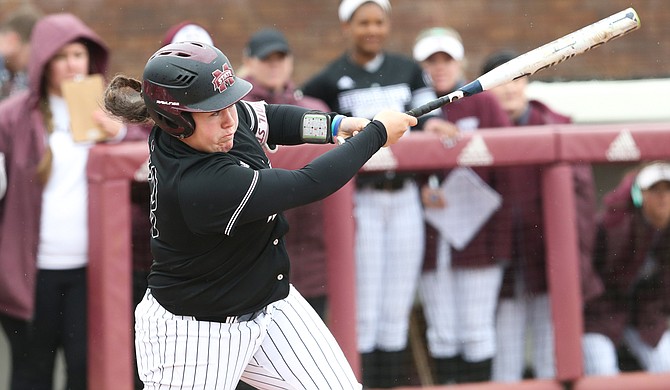 Mississippi State University catcher Mia Davidson became the third Bulldog in program history to receive the title of SEC Freshman of the Year on Tuesday, May 8. She is the first MSU softball player to earn the honor since shortstop Courtney Bures in 2005.

Davidson also landed on the All-SEC First Team, again the first MSU freshman to accomplish that since Bures. This gives the Bulldogs their second consecutive year of having a player earn First Team honors, following infielder Caroline Seitz last season.

The Hillsborough, N.C., native, took a spot on the SEC All-Freshman Team this season, as well, becoming the first MSU player to do so since Seitz and pitcher Alexis Silkwood in 2014.

Davidson leads the entire SEC, not just freshmen, in homeruns, total bases and slugging percentage. She is 10th in batting average and third in hits in the conference, and leads nearly every statistical category over SEC freshmen.

She has been named SEC Freshman of the Week three times during the season, which is a program record. Davidson is one of the 25 finalists for the Schutt Sports/NFCA National Freshman of the Year Award.

Three MSU players have started in all 56 games so far this season, but she was the only freshman to accomplish the feat. No other MSU player joined her on any of the postseason All-SEC teams.

Before coming to Mississippi State, Davidson attended Hillsborough's Orange High School, where she was named the 2016 and 2017 North Carolina Gatorade Player of the Year. FloSoftball ranked her as the No. 4 recruit in the nation last year, making her one of the highest-ranked recruits to ever play for MSU. She isn't the only Davidson on the Bulldogs roster, either, as her older sister, Montana, also is an infielder on the team.

The play of the super freshman has helped MSU to a top-25 ranking and a top-20 RPI rating. Game one of the SEC Softball Tournament is the only thing that has slowed her down this season. In the Bulldogs' 2-0 win over Texas A&M University on May 9, she went zero for three at the plate with a strikeout.

She will have a chance to get her bat going on day two, as the Bulldogs are currently facing the University of South Carolina. The game began at 11 a.m. today, May 10, on the SEC Network, and Davidson is currently zero for two at the plate as of press time.

If MSU loses to the Gamecocks, the team will have to wait until the NCAA Tournament field is announced on Sunday, May 13, to see if their postseason will continue.