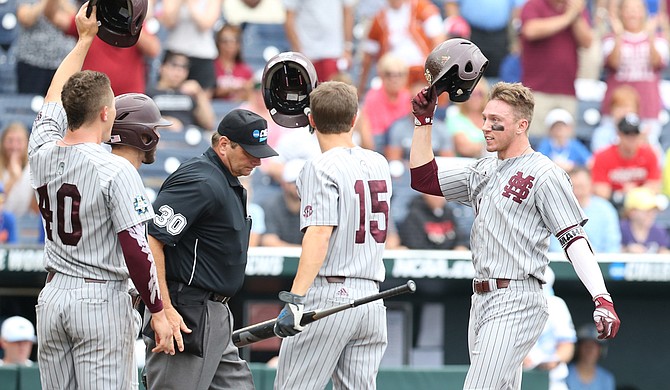 There was no need for Mississippi State University's late-game heroics in the team's second game of the 2018 College World Series.

In game one, the Bulldogs had a walk-off game-winning hit, narrowly beating the University of Washington 1-0. They came out with a sound victory over the University of North Carolina at Chapel Hill in game two.

Weather pushed the game from early Monday evening, June 19, to early Tuesday, June 20. The Tar Heels struck first that morning, scoring a run in the bottom of the first inning, but MSU answered back in the top of the second.

Then, the Bulldogs loaded the bases, which set the table for freshman designated hitter Jordan Westburg to come up to bat with two outs. He crushed a pitch on a 1-2 count deep to left field, leaving the park for a grand slam.

The Tar Heels cut into the Bulldogs' lead with another run in the bottom of the seventh, making the score 4-2. Then, MSU put the game away, scoring eight runs in the eighth inning. Westburg came to the plate with the bases loaded for a second time that game, and once again, he drove a ball to left field, clearing the bases with a three-run double. Ultimately, MSU came out ahead 12-2.

After going zero for three at the plate in the opening game, Westburg managed to tie a College World Series record with his seven RBIs against UNC. The New Braunfels, Texas, native went three for four at the plate in game two.

This most recent victory moves MSU one game away from playing in the National Championship Series for the second time in school history. In 2013, the University of California, Los Angeles defeated the Bulldogs in two consecutive games, making MSU the runner-up.

Westburg's success at the plate is not the only thing to grab him media attention this season. During a Tallahassee Regional game on June 3, he grabbed a banana in the dugout and began to use it as a radar gun and phone, which the ESPN cameras caught. That same game, the Bulldogs' fortunes began to change, as MSU went from the losers' bracket to winning the regional.

The banana stayed with the team in the Super Regional against Vanderbilt University, with the Bulldogs winning the best of three series 2-1 to advance to the World Series. Thus far in the postseason, Westburg has recorded eight hits, two doubles, 11 RBIs, three runs scored and a home run.

Before enrolling at Mississippi State, Westburg attended New Braunfels High School, where he was named a Texas High School Baseball Coaches Association First Team All-State shortstop in 2016 and 2017. As a senior, he hit for a .457 average with 36 runs scored, 22 RBIs, 13 doubles, four home runs and three triples. That year, he was also the District 27-6A MVP.

MSU will hit the field in an elimination game against Oregon State University on Friday, June 22, at 2 p.m. on ESPN.