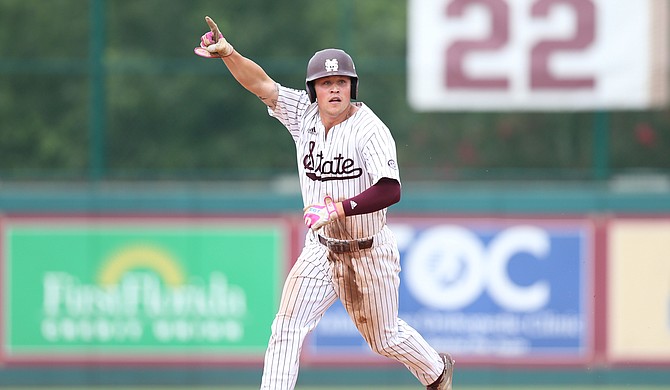 The Bulldogs lost to the University of Oklahoma 10-20 in game one of the regional and found themselves facing elimination against host Florida State University in game two. FSU led 2-0 in the bottom of the ninth inning, but the Bulldogs had two runners on base after a pair of walks.

With two outs, MSU outfielder Elijah MacNamee stepped to the plate and blasted a no-doubt walk-off home run to give his team a 3-2 win. The victory eliminated FSU from the regional and gave new life to the Bulldogs.

MacNamee finished the game two-for-four with three runs batted in (RBI) and one run scored. His game-winning home run kept him hot after his showing against Oklahoma, with a three-for-five record at bat, three RBIs, two runs scored, a double and home run.

The junior from Cypress, Texas, helped out once again in the Bulldogs' 9-8 win over Samford University, as MSU staved off elimination. MacNamee only went one-for-four at bat, but had a home run, two RBIs and two runs scored.

MSU faced the Sooners again in the regional final, needing two consecutive wins to reach a Super Regional. In the first game, MacNamee struggled in the batter's box with just a one-for-five recpord and one run scored, but the Bulldogs managed a 13-5 win.

That set up a winner-takes-all game on Monday, June 4, to advance to a Super Regional.While the young outfielder wasn't spectacular, he did finish one-for-four in batting with a run scored. The Bulldogs romped to an 8-1 victory and moved on to a Super Regional against Vanderbilt University.

Over the course of five games in the regional, MacNamee went eight-for-22 batting with eight RBIs, five runs scored, three home runs and a double. He also extended his career-high hitting streak to 10 games in a row and has reached base in 26 consecutive games.

His heroics with his bat earned him All-Regional Team and the title of Most Outstanding Player. Teammates Jake Mangum, J.P. France, Dustin Skelton and Rowdey Jordan join him on the All-Regional Team.

Last season, his first one with the Bulldogs, he played in 57 games but only hit for a .267 batting average. He finished with 48 hits, 22 RBIs, 22 runs scored, six doubles, two home runs and one triple.

MSU is now the 23rd team to lose the first game of a regional and come back to win the competition. However, the Bulldogs are the first team to ever accomplish this feat in back-to-back seasons, following last year's Hattiesburg Regional. MSU reached its eighth Super Regional in team history and its third Super Regional in consecutive years.

MSU, now 35-26 overall, travels to Vanderbilt to play the Commodores in a best-of-three Super Regional. Game one begins Friday, June 8, at 7 p.m., airing on ESPN2. Game two will be at 8:30 p.m. on June 9, with coverage on ESPN. If necessary, game three will be at 5 p.m. on June 10, airing on ESPN2. The winner of the Super Regional will advance to the 2018 College World Series.