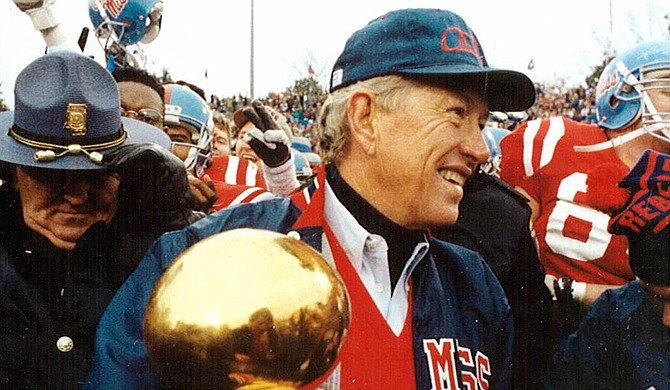 Former University of Mississippi head football coach Homer Ervin "Billy" Brewer lived long enough to find out he would be inducted into the Mississippi Sports Hall of Fame this year. Unfortunately, he died May 12, only two months before the Hall of Fame intended to honor him.

Even during his time at Steven D. Lee High School in Columbus, Miss., where he played football, baseball and track, Brewer knew he wanted to be a Rebel. His efforts on the football field earned him a spot in the Mississippi High School All-Star Game in 1955.

In 1957, his wish came true as he began the first of three seasons for legendary UM head coach Johnny Vaught. As a varsity quarterback, Brewer helped the Rebels achieve a 28-4-1 record that included a 10-1 season in 1959. That team won the Southeastern Conference, and the SEC named it Team of the Decade.

The Washington Redkskins selected Brewer in the 20th round of the 1959 NFL Draft. He played just one season for Washington before accepting a spot the British Columbia Lions for the next season. After leaving professional football, he started his coaching career at the high-school level.

He achieved success as coach at both Lee High School and Heritage Academy, compiling a 70-17-2 record at the two schools. That led him to move up to the college ranks as an assistant coach for Southeastern Louisiana University in 1972.

In 1974, Brewer received a promotion to head coach for the Southeastern Louisiana Lions. He led the team to a 38-24-2 record in his six seasons as head coach, then leaving to serve as Louisiana Tech University's head coach in 1980.

His best season with the Bulldogs came in 1982 as he led his squad to a 10-3 record, a Southland Conference championship and the semifinals of the NCAA Division I-AA Playoffs.

While Brewer was having success in the coaching ranks, his former university wasn't fairing well on the field. The Rebels had not managed a winning season since going 6-5 in 1975 and had not played on a bowl game since 1971.

Then, in 1982, Brewer replaced UM coach Steve Sloan and quickly turned things around with a 6-6 record, which included a 24-23 win over rival Mississippi State University. He couldn't sustain his initial success, though, as the Rebels finished both the 1984 and 1985 seasons with a 4-6-1 record.

In 1985, Brewer reinstated the tradition of the team walking through The Grove before games on a path now known as the Walk of Champions.

The Rebels bounced back in the 1986 season with a 8-3-1 record that included a 21-19 victory over Louisiana State University. UM also beat Texas Tech University 20-17 in the Independence Bowl.

The Rebels rebounded in 1989 with an 8-4 record that included a 42-29 win over the Air Force Academy in the Liberty Bowl. That season was bittersweet for the Rebels, however, as defensive back Chucky Mullins was paralyzed during the homecoming game against Vanderbilt University.

Brewer honored Mullins by creating the Chucky Mullins Courage Award, which gave a defensive player the honor of wearing Mullins' No. 38 each season.After Mullins died of a blood clot in 1991, Brewer did the eulogy at his funeral at C.M. "Tad" Smith Coliseum.

The Rebels scored back-to-back winning seasons after finishing 9-3 in the 1990 season. UM ended up falling 3-35 to the University of Michigan the Gator Bowl.

Brewer couldn't string together three straight winning seasons, though, as he led the team to a 5-6 record in the 1991 season. His last winning run as head coach came in the 1992 season, which ended with a 13-0 win over Air Force in the Liberty Bowl and a 9-3 record.

UM celebrated its 100th season of football in 1993 and named Brewer to the "Team of the Century" as a defensive back. Sadly, on the field, the Rebels finished 5-6 in what turned out to be his final season as head coach.

The university parted ways with him after the NCAA hit the school with probation for the second time under his leadership. In his 11 seasons at UM, Brewer went 67-56-3 overall. He is the second winningest and tenured coach in school history behind Vaught.