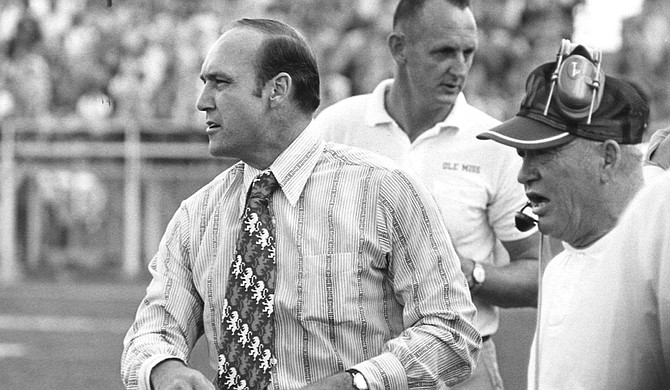 Former University of Mississippi football coach and star athlete Billy Kinard died on June 30, 2018, at the age of 84 in his home at Fort Payne, Ala., after an extended illness. He and his wife of 62 years, Kay Kinard, had son Billy Jr., daughter Kathy, five grandchildren and nine great-grandchildren.

Kinard, who was born in Jackson in 1933, eventually followed in the footsteps of his three older brothers, Frank, George and Henry, and played college football at the University of Mississippi. Frank, also known as "Bruiser," might be the best-known brother with membership in the College and Pro Football Halls of Fame, but the youngest Kinard was a standout player on the gridiron and the baseball diamond for the Rebels.

Before joining the Rebels, the Jackson native attended and played various sports at Jackson Central High School. There, he earned All-Big Eight Conference and All-State honors as a halfback in 1951. He also played guard on the basketball team and catcher on the baseball team.

During Kinard's time at the University of Mississippi, the Rebels' football team posted a 34-6-3 record, won the Southeastern Conference title in 1954 and 1955, and also played in the Sugar Bowls twice and the Cotton Bowl, also earning third-team All-SEC honors in 1955.

In baseball, Kinard earned first-team All-SEC in 1956, the same year the Rebels placed third in the College World Series and won the SEC West and NCAA District III titles.

After his graduation, the Cleveland Browns selected Kinard in the second round with the 25th overall pick in the NFL Draft. He played his rookie season with the Browns before they traded him to the Green Bay Packers, with whom he played the 1957 and 1958 seasons.

Kinard's professional teams did not enjoy much success on the field, with the Browns finishing 5-7 in 1956, and the Packers going 3-9 in 1957 and 1-10-1 in the 1958 season. Green Bay hired Vince Lombardi after the 1958 season, but Kinard wouldn't play for the legendary coach. Instead, he chose to take a coaching job himself at Mainland High School in Florida in 1959.

He then returned to professional football to play for the Buffalo Bills during the 1960 season. The Bills finished that year with a 5-8-1 record, and Kinard decided to end his pro football career and coach college football.

He began his new career path at Auburn University in 1962 and 1963 under coach Shug Jordan before becoming the University of Florida defensive-back coach under Ray Graves from 1964 to 1966.

Meanwhile at the University of Mississippi, head coach John Vaught suffered a heart attack in October of that year and had to retire from the program. Frank Kinard, Vaught's assistant coach, took over as head athletic director and asked his youngest brother to join the staff as head coach of the football program.

Billy Kinard accepted, becoming the first alumnus to return as head coach. He enjoyed instant success with the Rebels in 1971, finishing the season with a 10-2 record, a victory over the Georgia Institute of Technology in the Peach Bowl and the No. 15 spot in the Associated Press rankings.

This success didn't last long, though, as the Rebels finished with a 5-5 record in 1972. After a 1-2 start in 1973 , the university replaced both Kinard brothers with the returning Vaught. Billy Kinard became the Green Bay's defensive-back coach after leaving the Rebels, working for the Packers for 1974 and 1975 seasons before accepting the same position with the Browns from 1976 to 1977.

In 1978, Gardner-Webb University offered him his first—and last—head coaching position in college football. Kinard finished the season with a 4-5-1 record, bringing his career total to 20-14-1.

Kinard then returned to the NFL as a defensive-back coach for the New England Patriots during the 1979 and 1980 seasons. Afterward, he decided to move back to the high-school coaching ranks and relocted to Alabama, with stops at Jackson Academy from 1986 to 1987, Lanett High School from 1990 to 1992, and Northview High School from 1993 to 1997. He retired from coaching with a 60-40 record.