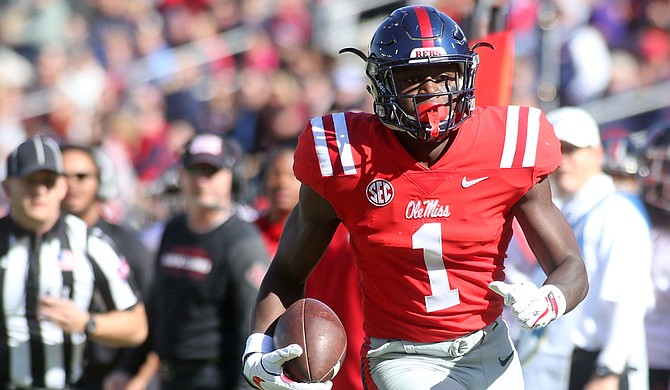 University of Mississippi wide receiver A.J. Brown is getting love from nearly everywhere this offseason. It should be expected after he put up one of the best single-season receiver performances in school history last year.

Brown was a successful high-school player, finishing his senior year with 83 receptions 1,371 and 13 touchdowns, as he helped Starkville High School to the 6A state championship. Most recruiting outlets made him a consensus four-star recruit.

UM was able to recruit him out of the backyard of their main rival, Mississippi State University. The breakout season came in his freshman season, when he recorded 29 catches for 412 yards and two touchdowns.

The Starkville, Miss., native broke the school record for receiving yards with 233 on eight receptions with two touchdowns against the University of South Alabama. His touchdowns, 71 and 77 yards, made him the first receiver in school history to have two 70-plus-yard touchdowns in one game.

He tied a school record for most receptions in a game against the University of Louisiana at Lafayette with 14 grabs for 185 yards and two touchdowns. The single-game records were just the beginning for Brown's outstanding season.

Brown finished as a semifinalist for the Biletnikoff Award, which goes to the nation's best receiver. He won the 2017 Conerly Trophy, which goes to the best player at a four-year college or university in the state of Mississippi.

This preseason the praise has been heaped upon Brown. USA Today, Athlon, CBS Sports, Associated Press, Sporting News and Sports Illustrated and others have named him first team All-American. He was also named to the preseason first team All-SEC.

Barring injury or a major unforseen setback, Brown should equal to or surpass his production from season. If he decides to forgo his senior season and enter the 2019 NFL Draft, it is likely Brown will be one of the first receivers selected.

Before the decision on his NFL future, he gets a chance to rewrite the school record books. He and the Rebels open the season against Texas Tech University in Houston, Texas, and this could be a game in which defense is optional.

Brown will get chance to put up big numbers against Southern Illinois University before playing the University of Alabama. He gets another chance to play a huge game against Kent State University.