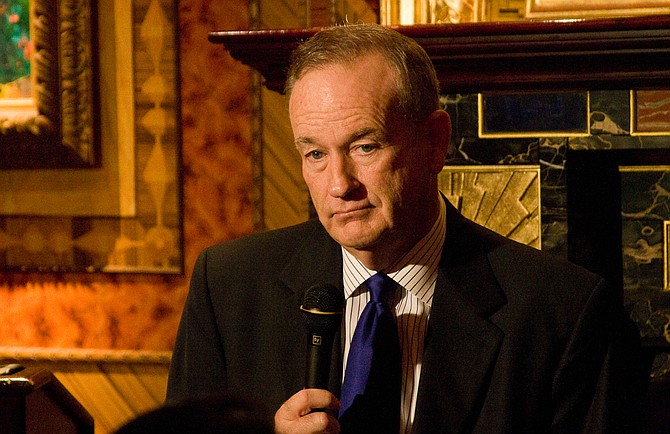 Fox has devoted more than 12½ hours of airtime to Weinstein since Oct. 5, when The New York Times broke the story about his misconduct, according to the liberal media watchdog Media Matters for America.

By contrast, Fox has spent 20 minutes, 46 seconds, on the accusations against O'Reilly since the Times revealed many of them in April, the group said.

A news organization's instinct to downplay a story that reflects poorly on itself isn't unusual. But in this case, some are attributing the disparity to politics. Weinstein has long been a supporter of liberal causes, while O'Reilly is a hero to many on the right, for whom Fox is the network of choice.

"Does liberal Hollywood have a problem with sexual predators?" Trevor Noah, host of Comedy Central's "The Daily Show," asked this week. "Yes. Does conservative Fox News have the same problem? Yes. That's my issue with this. It's not supposed to be partisan."

Indira Lakshmanan, a Boston Globe columnist and expert in journalism ethics at the Poynter Institute, a media think tank, said the Weinstein allegations are clearly a big story.

"But to devote hours of airtime to crowing about Weinstein's well-deserved downfall because of his liberal politics, while ignoring the massive, decades-long pattern of harassment by powerful men at Fox, is both hypocritical and sad," Lakshmanan said.

She said a news organization's ability to report on itself speaks to the integrity of its journalism and leadership.

Fox lawyers, wary of investigations into the network's conduct, may well have urged it to minimize its discussion of O'Reilly. The network would not discuss its coverage decisions.

The Times story on Weinstein set off a weekslong wave of other assault and harassment allegations against the studio boss, leading to Weinstein's firing from the film company that bears his name.

As for O'Reilly, he was ousted in April after two decades as cable TV's top personality. He was back in the news earlier this month, when the Times reported that he had reached a $32 million settlement with a former Fox analyst before signing a new contract early this year.

Following that story, O'Reilly's one-time colleague Megyn Kelly talked publicly about how she once complained to her bosses about him — a spectacle that went unremarked upon on Fox.

More than 16 minutes of the time that Fox has devoted to the O'Reilly scandal was on "Media Buzz," Howard Kurtz's weekend industry show, according to Media Matters.

"There's no question about it, it's embarrassing," Kurtz said. "It's disappointing that O'Reilly was given a new contract under these circumstances. I hope it doesn't impede the progress that the company has been trying to make, which, in the end, the company did fire its biggest moneymakers."

It's not just the time difference that's become an issue at Fox, it's how the time was spent.

One of Weinstein's critics on Fox has been Jesse Watters, an O'Reilly protege whose career took off because of regular appearances on his mentor's show.

Several of Fox's Weinstein stories were wrapped in media criticism, like Sean Hannity's contention that liberals were slow to condemn Weinstein. "It's a hypocrisy thing," Hannity said.

Fox commentators have also called on Democratic politicians who accepted money from Weinstein to renounce him.

Fox's Tucker Carlson pointed fingers at NBC's handling of the Weinstein story. NBC was embarrassed when it was revealed that it had rejected reporter Ronan Farrow's devastating investigation of Weinstein. He instead took it to The New Yorker.

NBC has said that the story Farrow gave the network was not ready to be aired.

A study has shown that Fox viewers are more likely to know about bad behavior by liberals, while an MSNBC viewer will be more aware of conservative missteps, said Kathleen Hall Jamieson, a communications professor and director of the Annenberg Public Policy Center at the University of Pennsylvania. A comparison of MSNBC airtime for the Weinberg and O'Reilly stories was not immediately available.

"The pattern is pernicious, because it leads people to think that when there's problematic behavior, it's always on the ideologically other side, not on one's own side," she said. "We want people to police — that is, condemn — behavior regardless of where they find it. We don't want them to think it's only one-sided."

Over at Comedy Central, Noah said he applauded Fox for going after people accused of sexual harassment.

"The good news," he said, "is you don't even have to leave the building."