Senate Panel Eager to Hear from Comey, Given OK to Testify 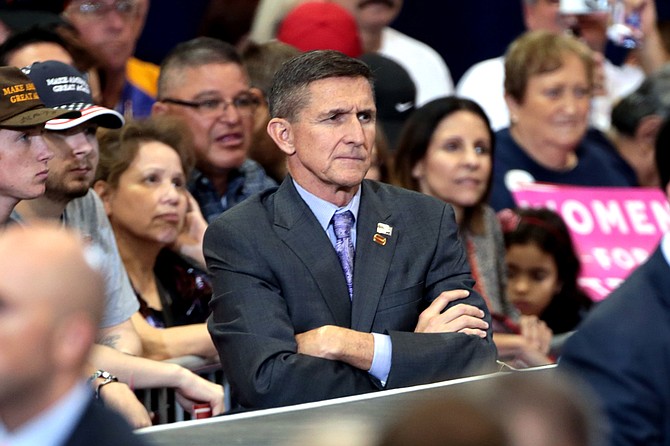 WASHINGTON (AP) — The House intelligence committee says it is issuing subpoenas for Michael Flynn and Michael Cohen—President Donald Trump's former national security adviser and Trump's personal lawyer—as well as their businesses as part of its investigation into Russian activities during last year's election.

Additional subpoenas for the National Security Agency, the FBI and the CIA seek information about requests that government officials made to unmask the identities of U.S. individuals named in classified intelligence reports.

The subpoenas were announced Wednesday as the special counsel overseeing the government's investigation into possible Trump campaign ties to Russia has authorized former FBI Director James Comey to testify before the Senate intelligence committee, according to a Comey associate.

White House press secretary Sean Spicer said inquiries about the Russia investigation must be directed to Trump's longtime personal attorney, Marc Kasowitz. It marked the first time the White House had officially acknowledged that outside counsel had been retained. Calls and emails to Kasowitz's New York firm were not returned Wednesday.

The Comey associate, who wasn't authorized to discuss details of the testimony and spoke on condition of anonymity, declined to discuss the content of Comey's planned testimony. The associate did say that Robert Mueller, appointed by the Justice Department this month to lead the government's inquiry, is allowing Comey to make certain statements.

Lawmakers are likely to ask Comey about his interactions with Trump as the bureau pursued its investigation into his campaign's contacts.

Associates have said Comey wrote memos describing certain interactions with Trump that gave him pause in the months after the election, including details of a dinner in which Comey claimed the president asked him to pledge his loyalty, and a request to shut down the investigation of Flynn.

A spokesman for Mueller declined to comment. Mueller's separate probe could conceivably look at the circumstances surrounding Comey's firing.

Congress is currently out of session. It resumes next Tuesday. No date for Comey's testimony has been set.

The Associated Press reported this month that Comey planned to testify after Memorial Day, but the approval from Mueller to do so could indicate that date is fast approaching.

The House panel pursuing its own investigation of the Trump campaign and possible Russia ties has also sought information from Comey, asking the FBI to turn over documents related to his interactions with both the White House and the Justice Department.

Subpoenas were approved Wednesday for Flynn and his company, Flynn Intel Group, and Cohen and his firm, Michael D. Cohen & Associates.

Cohen, who'd earlier refused a request for information saying it was "not capable of being answered," told The Associated Press on Tuesday that he would comply with subpoenas, should they be issued. He said he has "nothing to hide."

Trump has repeatedly dismissed allegations that his campaign collaborated with Russia ahead of the presidential election. Early Wednesday morning, the president tweeted "Witch Hunt!" in reference to testimony by Comey and former CIA director John Brennan before Congress on the topic.