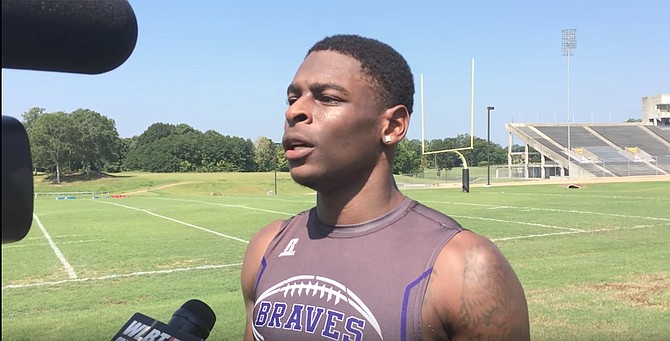 Alcorn State University will have some big goals for the 2017 college football season. For one, the Braves will be gunning for a fourth straight SWAC East title. If they can accomplish that, they'll play in their fourth consecutive SWAC Championship Game and have a chance at their third conference title in the last four years.

The Braves will need great quarterback play if they are going reach those goals, and on that front, star Lenorris Footman is the team's best hope.

Footman signed with the Braves in 2013 after graduating from Jefferson County High School in Monticello, Fla., where he led his team to the 2011 1A State Football Championship.

As a freshman at Alcorn, the Florida native saw limited action as a backup for former quarterback for John Gibbs Jr. Footman played in just nine games and completed nine of 19 passing attempts for 132 yards with one touchdown. He also had 110 rushing yards on 25 attempts with two touchdowns.

He continued to sit behind Gibbs at the beginning of the 2015 season, but an injury to Gibbs' ankle thrust Footman into the starting position.

While Gibbs was injured, Footman kept the Braves marching toward a second title. He set a school record for most rushing yards in a game with 274 yards for four touchdowns. He also passed for 71 yards with two touchdowns against Southern University, leading the Braves to a 48-7 win. His efforts earned him SWAC Player of the Week honors.

Footman took home a second SWAC Player of Week title that season, as he racked up 260 total yards and four touchdowns in the Braves' 65-13 win over Texas Southern University. He also led Alcorn to a SWAC Championship and to the inaugural Celebration Bowl.

The junior athlete looked for a big year in the following season, as he became the full-time starter in 2016. Instead, he went down with an ankle injury for much of the year, appearing in just seven games.

Even with the injuries, Footman returned to amass 254 total yards with five touchdowns in a 42-19 win over Alabama A&M University, earning SWAC Player of the Week yet again. Ultimately, he still had 1,134 passing yards with nine touchdowns and another 378 yards with seven touchdowns on the ground.

This is the final time that Footman will suit up for the Braves as he enters his last season of eligibility. He is on the preseason watch list for the 2017 Black College Football Player of the Year from the Black College Football Hall of Fame. Meanwhile, BOXTOROW's preseason poll of historically black colleges and universities ranks Alcorn State seventh. The school also received four votes in the Football Championship Subdivision poll.

Footman graduated in May with a bachelor's degree in criminal justice. He plans to chase his dream of becoming an NFL quarterback, but if that doesn't work out, his goal is to become an air marshal.

Alcorn State begins the 2017 season on Saturday, Sept. 2, with a home game against Miles College. Kickoff begins at 6 p.m.