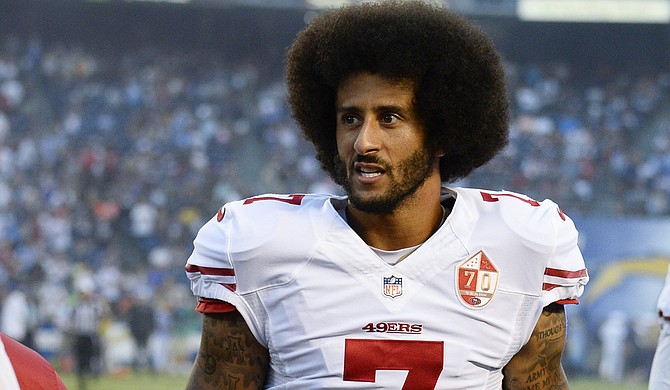 San Francisco 49ers quarterback Colin Kaepernick has been in the news a good bit for someone who hasn't played a down in this regular season yet. The former star made headlines in the preseason with several surgeries that put him behind physically.

Kaepernick tried to force the 49ers to trade him, with the Denver Broncos being one potential landing spot, but his contract, which is fully guaranteed for this season, was a major sticking point for many teams that would have been interested in his services.

As the preseason rolled along, it became clear that Kaepernick would lose the race for the starting quarterback job to failed Jacksonville Jaguars first-round pick Blaine Gabbert. San Francisco didn't want to cut him because of his guaranteed salary, and playing him this season risked triggering injury clauses for his salary next year.

However, the biggest news concerning Kaepernick was his protest of police brutality and racial injustice by kneeling during the national anthem. The protest sparked a discussion, with many differing opinions on the quarterback's choice not to stand.

Both the NFL and the 49ers said Kaepernick wouldn't be disciplined for his protest. He didn't even play during the first two preseason games and struggled when he saw action in the third game, completing two of six passes for 14 yards and rushed 18 yards on four carries.

After starting in the final preseason game, Kaepernick completed 11 of 18 passes for 103 yards and rushed four times for 38 yards. When the season began, Gabbert was at the helm of the offense.

San Francisco started the season with a 28-0 win over the Los Angeles Rams, but things turned quickly. The 49ers had four consecutive losses, and Gabbert struggled more and more with each start.

As the losses began to mount, it became clear that the team needed to make a change at quarterback, but Kaepernick had to restructure his contract.

He and the 49ers came to an agreement that eliminated his $14.5-million injury guarantee for the 2017 season and voids the final three years of his last deal. The new contract also features a player option to void the contract after this season.

This is a win-win for both parties. The 49ers won't be hit with a major cap charge if Kaepernick gets injured, and the quarterback can showcase his skills this season before he hits the free-agent market.

Now that Kaepernick will get his first start of the season against the Buffalo Bills on Sunday, Oct. 16, his protest has come back to the forefront.

Things were always contentious between the 49ers and Kaepernick. At one point, the team believed it found its next great quarterback who would follow in the footsteps of Hall of Fame players Joe Montana and Steve Young.

San Francisco drafted Kaepernick in the second round with the 36th overall pick after he had a stellar collegiate career at the University of Nevada. During his rookie season with the 49ers in 2011, he sat behind starter Alex Smith.

Smith suffered a concussion during the middle of the 2012 season, and Kaepernick took over the starting job. He stayed in the role even after Smith's return and led the 49ers to Super Bowl XLVII.

The Baltimore Ravens outlasted San Francisco in that championship game, which had a lengthy delay from a power outage. Kaepernick completed 16 of 28 passes for 302 yards with one touchdown and one interception, and he rushed for 62 yards on seven carries with one touchdown.

He remained the starter for the 2013 and 2014 seasons. He played in all 16 games for both years but started showing signs of regression in the latter. In 2015, he struggled on the field and suffered injuries. The quarterback only played in nine games that season, and in November, he was placed on the reserve with a shoulder injury.

Kaepernick had already lost his starting job to Gabbert before the 49ers placed him on injured reserve. The former star now has the rest of this season to impress teams so that he can once again win games in the league.

This NFL season started with Kaepernick fighting police brutality and racial injustice, but now, he is fighting to continue his career. If the quarterback can't prove that he can get it done on the field, it seems unlikely that another team will take a chance on him next season.