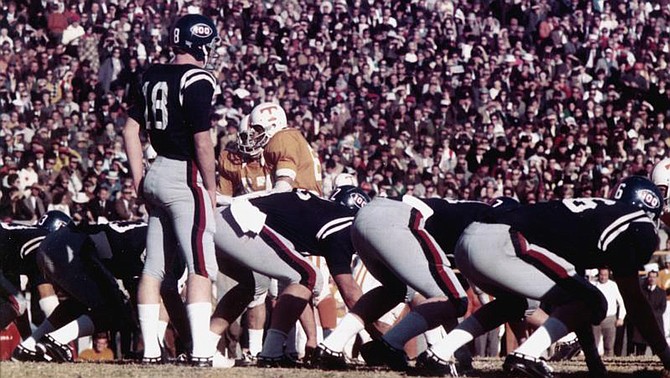 Former University of Mississippi quarterback Archie Manning hasn’t taken a snap on the field in 32 years, but he is still collecting accolades. This summer, Manning was awarded the Liberty Bowl’s Distinguished Citizen Award and named the 2016 National Football Foundation’s Gold Medal recipient.

Manning received his award from the Liberty Bowl while serving as guest of honor to the Liberty Bowl Golf Classic, a charity event that benefits St. Jude Children’s Research Hospital. He is the first former Liberty Bowl player to receive what the organization considers its most prestigious award.

Hailing from tiny Drew, Miss., Manning was a standout athlete at Drew High School. He excelled at football, basketball, track and baseball, where he started on the high-school team at 13 years old.

The Atlanta Braves drafted Manning during his senior year, but he decided to play football for the Rebels. The lure of playing for legendary UM coach Johnny Vaught brought him to Oxford instead of trying to play professional baseball.

Manning was the first sophomore to start at quarterback for Vaught when he took over the job for the 1968 season. That first season as a starter, Manning threw for 1,510 with eight touchdowns and 17 interceptions, and rushed for 208 yards and added five rushing touchdowns.

His play at quarterback helped the Rebels reach the 1968 Liberty Bowl. In a 34-17 win over Virginia Tech, Manning threw for 141 yards and two touchdowns.

The 1969 season was his breakout college season, as he threw for 1,762 yards with nine touchdowns and nine interceptions, and rushed for another 502 yards and 14 touchdowns.

Manning and the Rebels faced the University of Alabama in the first prime-time televised college football game. He threw for 436 yards and ran for 104 yards, as the Rebels came up short on the scoreboard in a 33-32 loss to the Crimson Tide.

The 540 total yards was a Southeastern Conference record until it was broken in 2012. Standout games against Louisiana State University, the University of Tennessee and the University of Georgia helped Manning end up fourth in the 1969 Heisman voting.

Manning led the Rebels in the 1970 Sugar Bowl in a 27-22 win over the University of Arkansas Razorbacks. He was named the game’s offensive MVP, as he threw for 273 yards with a touchdown and added a rushing touchdown.

During his senior season, injuries slowed Manning down but didn’t stop him from putting up impressive numbers. The Rebels star threw for 1,481 yards with 14 touchdowns and 14 interceptions and ran for 113 yards and six touchdowns.

In his final college game, Manning and the Rebels dropped a 35-28 game to the Auburn University Tigers in the 1970 Gator Bowl. Manning finished third in Heisman Trophy voting after the 1970 season.

Manning was named All-SEC and All-American in both the 1969 and 1970 seasons. He set numerous records for the Rebels, most of which his son, Eli, would break.

In the 1971 NFL Draft, the New Orleans Saints made Manning the second overall pick. He was the player who was supposed to lead the downtrodden franchise to respectability.

Manning wasn’t able to turn around the Saints, as he struggled under a porous offensive line, draft picks that were busts and lacking playmakers. In his 11 years with New Orleans, the team never had a winning record.

The best the Saints managed under Manning was a 7-9 season in 1978 and an 8-8 record in the 1979 season. In both of those seasons, Manning was named to the Pro Bowl.

Manning called it a career after his 1984 season. He finished his NFL career with 23,911 passing yards, 125 touchdowns and 173 interceptions. He added 2,197 yards rushing with another 18 touchdowns.

After his playing days, Manning has worked as a broadcaster, restaurant owner, investment broker, started the Manning Passing Academy, and has been a spokesman for various companies and products. He is also a part of several community-service projects.

Famously, his number 18 is the speed limit across most of the University of Mississippi campus, and he is a member of numerous Hall of Fames including the College Football Hall of Fame and the Mississippi Sports Hall of Fame. He was named to the Rebels Team of the Century, SEC All-Century Team and named SEC Legend.

Manning began working with National Football Foundation and College Hall of Fame Board of Directors in 1993. He became chairman in 2007 and helped build a College Football Hall of Fame in Atlanta.

In 2014, Manning was named to the College Football Playoff selection committee but left due to health issues. He has received multiple awards for his community service and contributions to the football over the years.

Manning joins seven former presidents, six former generals and several college football coaches to receive the NFF Gold Medal. He will be honored on Dec. 6 at the 59th NFF Major Awards and the new hall of fame class.