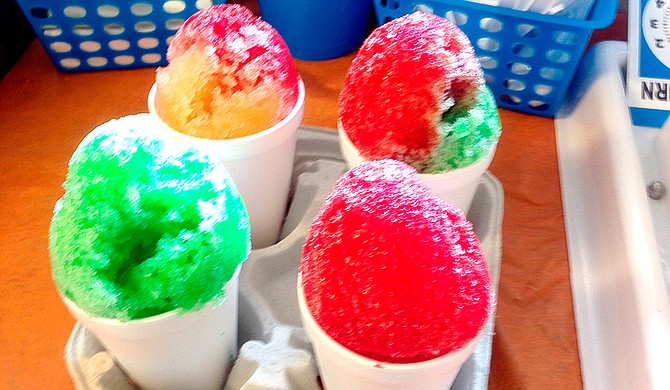 Last month, Jonas and Eboni Adams found a location at 5780 Highway 80 on the border of Clinton and Jackson where they could finally set up a brick-and-mortar location for their shaved ice business, Freeze & Thank You. Photo courtesy Freeze & Thank You

JACKSON — Husband and wife Jonas and Eboni Adams saw an opportunity when they had a hard time finding shaved ice near their home in Clinton. They decided to provide the service themselves, and three years ago, the pair opened their mobile business, Freeze & Thank You. The Adams started out selling shaved ice for events at their church, Washington Temple Christian Methodist Episcopal Church, and branched out into birthday parties, weddings and other gatherings, including a recent award banquet for the Dancing Dolls dance team. Last month, the Adams found a location at 5780 Highway 80 on the border of Clinton and Jackson where they could finally set up a brick-and-mortar location for Freeze & Thank You.

Since opening their permanent store, the Adams have been adding new flavors to their menu weekly and taking flavor suggestions, even naming flavor ideas after some of their customers. Freeze & Thank You currently has 22 original flavors and 18 special flavors. Among the special flavors are selections such as Ice Ice Baby, which is vanilla with cream; Ninja Turtle, which is sour apple mixed with fuzzy navel; Purple Rain, which is grape mixed with coconut; and Sonic Boom, which consists of blue raspberry mixed with pina colada and takes its name from the Jackson State University marching band. In addition to shaved ice, Freeze & Thank You serves pickles, boiled peanuts in regular and Cajun flavor and other treats.

Jack Myers, a Jackson resident who has owned and operated several LGBT bars in the area for more than 50 years, has retired at age 72. With Myers' retirement, his most recent business, Jack's Construction Site (425 N. Mart Plaza), also know as JC's, closed its doors July 3 after 25 years in operation.

Myers opened his first business, Mae's Cabaret, next door to Bakers Motel & Restaurant 50 years ago on what was then Delta Drive and is now Martin Luther King Jr. Drive. In 1976, he moved Mae's Cabaret to downtown Jackson with a new location at the intersection of Farish Street and Capitol Street. He then bought the Amite Theater to host the cabaret, which he later renamed Bill's Disco.

He next opened Jack's Saloon at the intersection of Capitol Street and Roach Street on July 4, 1980. Myers bought and expanded the building next door to the saloon for a new dance floor and changed the name to Jack & Jill's Dance Club and Bar. He next opened Jack's Construction Site in February 1991. Jack & Jill's later moved to 3911 Northview Drive, the location that now houses WonderLust.

"Jack has been fighting for and giving (to the) LGBT community from the beginning ... giving friends and family a great, safe place to go, relax and have fun with others like themselves. It gave everyone the opportunity to be themselves without the fear from the outside world. ... Jack's Construction Site, Jack Myers, the management team, bartenders and all the other behind-the-scenes staff would like to thank everyone, straight, gay, bi, lesbian and transgender, city and state officials and local law enforcement agencies, for helping and supporting JC'S and Jack's past clubs, bars, lounges and restaurants during all these years of business."

Debbie Bounds, owner of Just Plain Good Cakes, Cheesecakes and Catering, has been involved in the baking and catering business for more than 10 years. Bounds got her start working out of her home in Terry before opening a location at 7126 Siwell Road in Byram two years ago. On July 1, Bounds decided to move her business back to her Terry home. With the move, Bounds has switched to delivery alongside her catering work. For more information or to place a delivery or catering order, call 601-278-0037 or find Just Plain Good on Facebook.

Steve Morrison, owner of music store Morrison Brothers Music (888 Avery Blvd. N., Ridgeland), has decided to close up shop after 44 years in business. The store will close its door on July 9, and every item in the store will be on sale until then.

"I've been in it for a long time, and I felt like now is just the time for me to retire from the music business," Morrison told the Jackson Free Press.

For more information on Morrison Brothers Music, find the store on Facebook, call 601-956-0135 or visit the store's website.