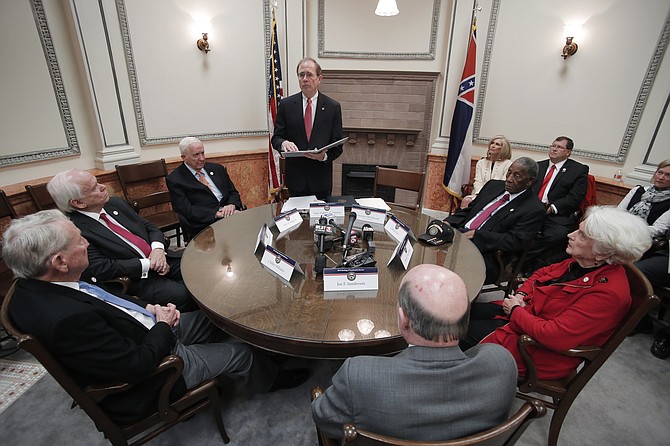 The state's six electors cast their votes for Donald Trump as the next president of the U.S.; their votes go to Congress for counting in January. Photo by Imani Khayyam.

JACKSON — Mississippi's six presidential electors cast their votes for Donald Trump for president and Mike Pence for vice president this morning at the Capitol.

The presidential electors had to add a new member to their group after Bradley White resigned as an elector, upon taking a position as U.S. Sen. Thad Cochran's chief of staff.

The remaining five electors voted to replace White with Charles Evers before casting their votes in the election of the 45th president of the U.S. Evers, who is the brother of martyred civil-rights activist Medgar Evers, said he voted for Trump in the presidential election.

Evers used to be a Democrat, he said, and then switched his party affiliation to Republican in the 1970s. He said he believes in "earning something" instead of giving something away. He voted for President Barack Obama in 2008 and 2012, he told reporters after casting his electoral college vote, but then supported Trump this election cycle.

"(I voted for Trump) for two reasons: first because he's a multi-millionaire,; I like rich folks and can't nobody buy him and, second, because he's going to bring jobs to us," Evers told reporters.

State law does not bound electors in Mississippi to cast their votes for specific electors, but they must take an oath saying they will cast their vote for a specific candidate. They do not face fines or penalties defined for breaking that oath, however.

The law is what Secretary of State Delbert Hosemann calls "quasi-bonding." Electors must sign a certificate including the oath, which state law spells out. The certificate then goes to the State Board of Election Commissioners.

After electors said an out-loud, in-person oath today, the state's electors first wrote on ballots with check boxes: one for Donald Trump or a blank line for a write-in candidate. All candidates voted for Donald Trump, despite one observer loudly breaking the silence saying, "write Hillary's name."

Then electors certified their votes, signing more paperwork that goes to Congress. Mississippi has six electoral votes, but 10 other states in the country have fewer.

Gov. Phil Bryant thanked the electors, saying they have an important job, and he also said he will attend the president-elect's inauguration on Jan. 21.

"It is a remarkable opportunity to show the world again the effectiveness of this great republic, and I hope there are no protests—they certainly have a right as Americans to do so ... but this is the peaceful transition of power that has occurred in this great republic since its very beginning," Bryant told the electors before they cast their votes for vice president.

A group of protesters gathered outside the Capitol before the electors came inside to vote, chanting "Brief the electors; send it to the House." Dr. Jay Carthan said the protest was not an attempt to change the electors' votes.

"We're here so that we can go down in history that we were against this president and how he was elected and against this process," she told the Jackson Free Press. "We have 538 people electing the president all across the United States. That's just crazy."

Carthan believes that the electoral college, which grew out of the slavery era, should be changed and updated to fit the U.S. as it exists today.

Email state reporter at arielle@jacksonfreepress.com and follow her at @arielle_amara for breaking news.