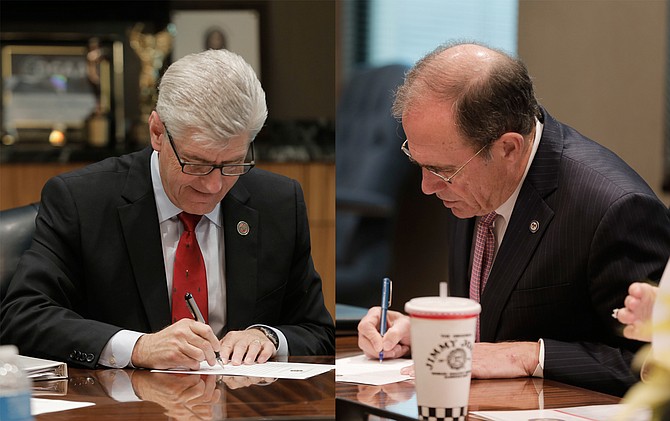 The Mississippi Board of Election Commissioners certified the judicial election results on Wednesday, Dec. 14. The governor, secretary of state (pictured) and attorney general are on the board. Photo by Imani Khayyam.

JACKSON — Donald Trump officially won Mississippi with 58 percent of the vote this week when Secretary of State Delbert Hosemann certified the election results.

The Mississippi Board of Election Commissioners—made up of Gov. Phil Bryant, Secretary of State Delbert Hosemann and representatives from the attorney general's office—also certified the election of three Mississippi Supreme Court justices and three Mississippi Court of Appeals judges.

All election results for the state, including the presidential election, are now available online.

On Monday, Dec. 19, Mississippi's six electors for the electoral college will meet at the Capitol to cast their votes officially in the presidential election. No federal law or constitutional provision requires electors to vote in accordance with the popular vote, but all six of Mississippi's electors are pledged to vote for Donald Trump, Jennifer Dunagin, the communications director at the Mississippi Republican Party confirmed.

Mississippi has six electoral votes in the electoral college; the state's population and the number of U.S. elected officials in the state determine this number. The Mississippi Republican Party chose Mississippi's six electors at its nominating convention in May. Political parties choose their electors, and those slates go to the secretary of state's office prior to the election.

When voters select a presidential candidate on the ballot, they are also selecting their state's electors, according to the U.S. National Archives information on the electoral college. By voting for Trump in November, Mississippians chose the state GOP's list of six electors to cast votes for Trump next week.

White has removed himself as an elector, Dunagin confirmed, because he recently took a job with the federal government. A constitutional provision disallows senators, representatives or other people holding office to be electors but is unclear on those who work for federal officials.

"We have been told that although the law does not appear to be clear as to whether this restriction extends to all federal staff, the National Archivist has advised that the restriction could disqualify any person who holds a federal government job from serving as an elector," Dunagin said in an emailed statement.

Email state reporter Arielle Dreher at arielle@jacksonfreepress.com and follow her at @arielle_amara on Twitter for breaking news.