Act One, Scene One 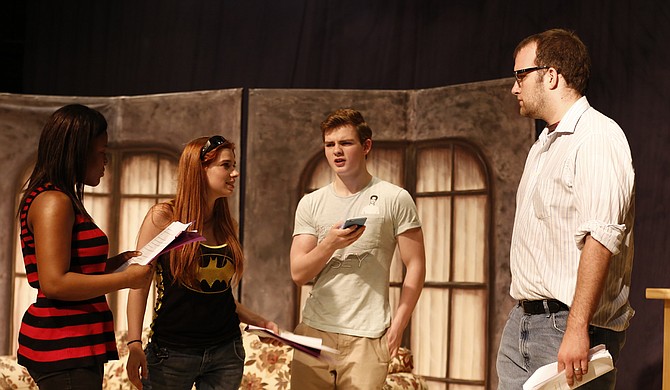 One of the plays in Black Rose Theatre’s “A Night of One Acts by Local Playwrights” is Becky Martin’s “Deja Brew,” which stars (left to right) Morgan Hannah, Samantha Gregory, Sam Furman and Curtis Everitt. Photo by Imani Khayyam.

Lauri Gregory, the board president at Black Rose Theatre Company, was a stranger to theater before coming to Mississippi 28 years ago. The Spokane, Wash., native got involved in 1997 when she took her daughter, Samantha, to audition for "Rapunzel Uncut." Samantha got the roles of townsperson and soloist in the play and soon obtained her second role in "Anything Goes" as part of its ensemble. Gregory observed night after night until one of the adult actresses in the show became ill and had to drop out. Though Gregory had no prior theater experience, the director asked her to step in. "They handed me a script, and I have been here ever since," she says.

This July is the fourth consecutive year for Black Rose to host "A Night of One Acts by Local Playwrights." Each year, the play-reading committee for the theater chooses several works that local writers submit. This season, two dramas, one mystery and a comedy will take the stage.

One of the plays the theater will perform at "A Night of One Acts" this year, "Mamma's Child," which Carol Byrnes, 56, wrote and directed, took second. First written as a monologue, Byrnes based the autobiographical drama on experiences she had growing up with black "help," and several subsequent incidences where race played major roles in pivotal events throughout her life. "It's very much a tribute to erasing racism," she says.

Byrnes, who has been involved in theater since age 6 and has written six full-length plays, graduated from the Theatre Conservatory at the Chicago College of Performing Arts at Roosevelt University, a highly selective and competitive fast-track program for theater virtuosos, in 2010. A rare and prominent accolade in the world of theater, Byrnes is the first Mississippian to ever earn the distinction. She is currently working on her second master's degree through the University of Southern Mississippi. She has also been teaching art and theater classes at Florence High School since 2007.

Perseverance is the overriding theme of the second drama, "Grace Renewal." "It's a multi-generational drama about people setting out into the world trying to start something and repeatedly failing," Jonathan Dixon, the play's writer, says. The 27-year-old began acting at Brandon High School and graduated from Belhaven University in 2012 with a bachelor's degree in theater ministries. He says that while there is a spiritual nature to his piece, it's not a documentary of his own experiences. During and after college, Dixon worked with Black Rose and Mississippi Murder Mysteries, a dinner-theater troupe that entertains restaurant-goers in the Jackson area, before moving to Massachusetts for six months to perform with Sea Change Theatre Company. He returned to Mississippi in early 2013 and resumed working with Black Rose. Dixon also works at the Brandon Public Library.

To bring some comedic relief to all the drama, director Wendie Sheppard presents Becky Martin's "Deja Brew." When two girlfriends discover a lost cell phone in a coffee shop, one of the women urges her reluctant but single friend to find its owner. Martin, a Florida native, has also published paranormal romance novels under the pen name Skye Savoy and owns Mississippi Murder Mysteries. She and the dinner theater group just finished "Murder in Tights," a play about geriatric superheroes who try to save the future of their adult day-care center. "Life has enough tragedy in it, so I typically write comedies," Martin says. "I don't think I know how to be serious."