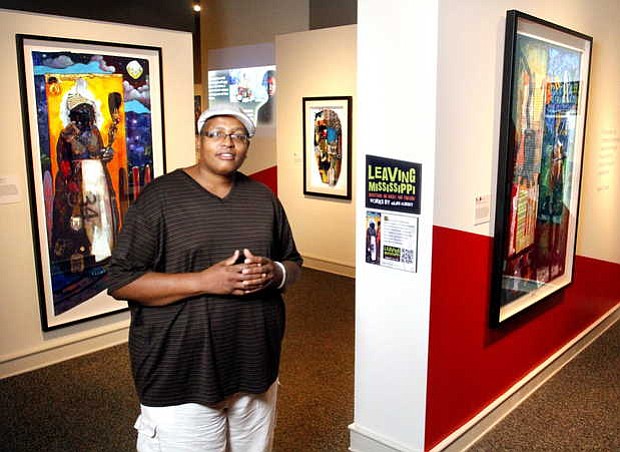 Artist Najee Dorsey uses collage to tell his story of growing up in the South and especially in Arkansas' Mississippi County.

His artwork combines painterly elements, along with photos and other mediums to create his pieces, which generally center around African American life in the South, often featuring elements such as blues music, dance and religion. His work has been exhibited at places such as Avisca Fine Art Gallery in Marietta, Ga., and the American Jazz Museum in Kansas City, Mo. He is also the founder of Black Art in America, a global social network for African American artists, collectors, industry leaders and art enthusiasts.

In his newest exhibit, "Leaving Mississippi: Reflections on Heroes and Folklore," Dorsey tells the African American story through bright colors and multidimensional elements, such as photos and patterned paper. The collages feature many unsung heroes in the Civil Rights Movement and other African Americans who have influenced the culture, such as Dangerfield Newby and Robert Charles. The title of the exhibit, which comes from the name of the county where he grew up in Arkansas, alludes to the Great Migration in the early 1900s, when African Americans searched for better lives in northern cities such as Detroit, Harlem, New York City and Chicago.

"In the work I do, I present an American experience through the lens of my African American perspective," Dorsey said in a press release.