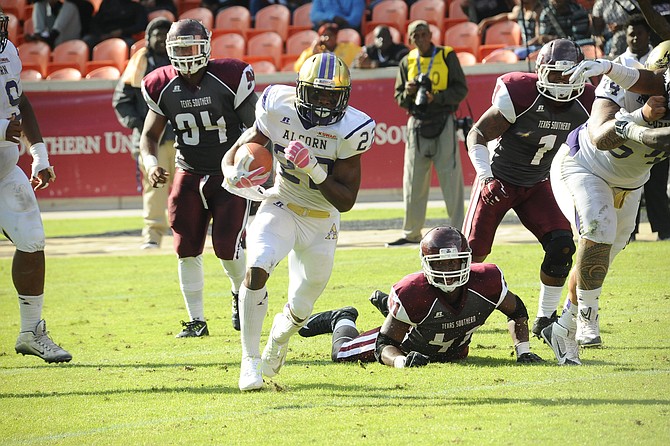 Until last Saturday's SWAC Football Championship Game, Alcorn State University running back Darryan Ragsdale might have been the best under-the-radar football player at a Mississippi college or university.

That was before the Conerly Trophy Finalist went off against Grambling State University, as the Braves were able to win back-to-back SWAC Championships for the first time since they did in 2002 and 2003.

The former Pelahatchie star set a SWAC Football Championship Game record with 191 yards on just 15 carries on his way to earning Offensive MVP honors. Ragsdale got the Braves off to a fast start with his championship game record 84-yard touchdown run for the game's first score.

Ragsdale had a strong junior season in high school, in which he rushed for 1,925 yards with 20 touchdowns. After his senior season (2010-2011) at Pelahatchie High School, where he rushed for 2,108 yards with 23 touchdowns, Ragsdale was named to the Class 2A Mississippi Association of Coaches All-State Team. He ended up signing with Hinds Community College out of high school.

While at Hinds, Ragsdale was injured his freshman season (2011-2012) and played in just one game and rushed for 34 yards on seven carries. He returned the next season (2012-2013) and rushed for 658 yards on 108 carries with three touchdowns and seven receptions for 159 yards.

Ragsdale averaged 6.1 yards per rush in his first healthy season at Hinds. After the 2012-2013 season, Ragsdale spent spring practice with the University of Mississippi as a preferred walk-on, though he didn't stay, instead going back to Hinds.

In his final season at the community college (2013-2014), Ragsdale rushed for 482 yards on 78 carries with four touchdowns and an average of 6.8 yards per carry. He also had five catches for 45 yards. Ragsdale signed with Alcorn State in spring 2014.

Injuries limited him to just nine games in his first season with the Braves. The 5-feet 11-inches, 190-pound running back still rushed for 691 yards on 87 carries with seven touchdowns for an average of 7.9 yards per carry. The star running back also finished the 2014-2015 season with six catches for 48 yards and six kickoff returns for 118 yards.

This season, Ragsdale was able to finish with 1,046 yards on 140 carries with eight touchdowns as the Braves leading rusher with an 8.2 yard-per-carry average. In his final season for Alcorn State, he had 18 receptions for 145 yards.

After the season, the conference named Ragsdale All-SWAC Second Team running back. He was one of 11 Alcorn State players to be honored after the regular season.

The Celebration Bowl will wrap up Ragsdale's college career. The game will be televised on ABC on Saturday, Dec. 19, at 11 a.m. in the Georgia Dome in Atlanta. He will be one of two star running backs in the Celebration Bowl, the other being North Carolina A&T's Tarik Cohen.

After leaving Alcorn, Ragsdale will try to carry on his career in the NFL. He can use the Celebration Bowl to help his NFL stock either in the draft or as an undrafted free agent.