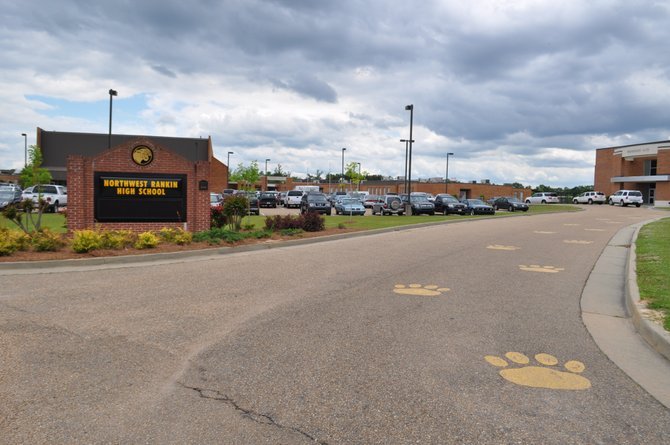 A senior at Northwest Rankin High School, represented by the American Humanist Association, filed a contempt motion Wednesday in U.S. District Court in Jackson. The student says an April 17 districtwide honors program violated the district's November settlement of a lawsuit over Christian-themed assemblies at the school. Photo by Trip Burns.

The senior at Northwest Rankin High School, represented by the American Humanist Association, filed a contempt motion Wednesday in U.S. District Court in Jackson. The student says an April 17 districtwide honors program violated the district's November settlement of a lawsuit over Christian-themed assemblies at the school.

A district spokeswoman and a lawyer didn't respond to requests for comment.

In an affidavit, the student said the Rev. Rob Gill, pastor of St. Mark's United Methodist Church, gave an invocation at the honors program, meant to recognize all students in the district who scored above 22 on the ACT test.

The student said she felt pressured to participate in a prayer that she perceived as a reference to Easter and the resurrection of Jesus Christ. The student said Rankin County Superintendent Lynn Weathersby and other officials took part.

"As a result of the defendants' actions surrounding the prayer at the awards ceremony, I felt incredibly embarrassed, humiliated and frustrated," states the 17-year-old student, identified only as M.B. in the complaint.

The student said she was also forced to attend the original assembly at Northwest Rankin that sparked the lawsuit.

The association says the district agreed to bar official prayer during the school day, citing a policy Rankin County adopted in July 2013 that states in part that "school activities conducted during instructional hours should neither advance, endorse or inhibit any religion; should be primarily for secular purposes and should not obligate or coerce any person into participation in a religious activity."

Monica Miller, a lawyer for the association, said the assembly took place during school hours and is covered by the consent decree. Miller said the association contends that any official prayer at a student activity is an unconstitutional promotion of religion, citing U.S. Supreme Court rulings.

A 2013 state law tried to create a way for Mississippi public school students to pray at football games, graduations and other school functions. But because the prayer in question wasn't delivered by a student, the law doesn't appear to apply.

The association asks U.S. District Judge Carlton Reeves to issue civil contempt fines of $1,000 apiece against the district and Northwest Rankin Principal Charles Frazier, giving the money to the student, and to threaten the district with a $20,000 fine for any future violation. The student also asked that Reeves make the district pay attorney fees. The association was awarded $15,000 in fees in the initial settlement.

Prayer in schools occurs every time there is an exam of any kind. If you don't think that prayer isn't going on in a calculus class, just look at students' lips. That is the only kind of prayer that should be permitted--silent prayer!

I am UNALTERABLY opposed to ANY kind of prayer in ANY school. Why? Because I am NOT nor have I ever been a Christian and most school districts think that there is only ONE religion in this country--Christianity.

My days in elementary school were made miserable because I refused to pray in the name of ANYONE let alone in the name of Jesus. In my faith, we just go directly to the Creator and leave it at that, we don't require a mediator.

None of my faith's holidays were recognized and I had to fight like hell when I took off despite the school saying I could not. What about MY freedom of religion? It was totally ignored. I was counted as "skipping school" and paid through the nose for so doing.

Christians today are mentally unbalanced if they think that THEIR religion is under attack for one reason or another. They're not being attacked, they're the majority religion in the country for now. Young people are leaving churches in droves because preachers screaming about hellfire and brimstone are no longer considered worth of hearing--even the Pope has said that there is no LITERAL hell, it is a myth as is the story of Adam and Eve. Human life began in Africa, not in a mud pit in the middle east.

bevmar- You need to check a little deeper ,Vatican has said the Pope did not say there is no literal hell nor did he say the story of Adam and Eve was a myth.

"Pontifical Council for Culture issued a stern warning on its Facebook page, stating that scores of unknown sources on social media "try to put false information in circulation, taking advantage of the fact that it is so easy to 'throw the stone and hide the hand.'"

The council's advice? "Check the official Vatican media sources for confirmation of Pope Francis' statements." Remarks should be considered untrue if they do not appear on the pope's Twitter feed, the Vatican Information Service, the Holy See press office, the Vatican website, Vatican Radio, the L'Osservatore Romano newspaper or another official information source, the council said.