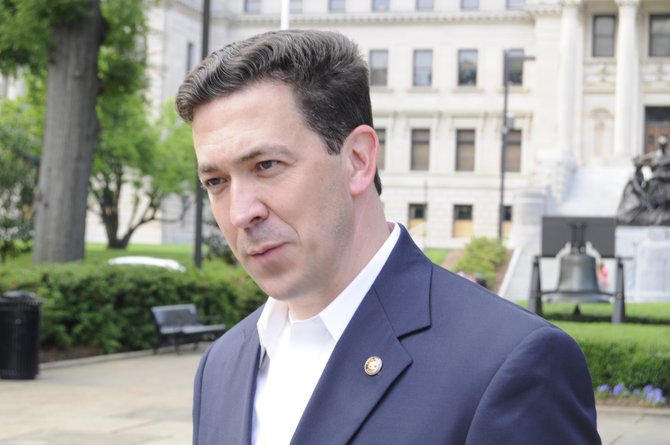 State Sen. Chris McDaniel, who is contesting his loss in the June 24 Republican primary for U.S. Senate, could figure prominently into legislative discussions about election reform in his role as chairman of the Senate Education Committee. Photo by Trip Burns.

Assuming the Republican primary for U.S. Senate is resolved by the start of the 2015 legislative session, the Legislature could grapple with whether legislative fixes are required to curb electoral chaos in the future.

It seems like eons ago that a blogger tip-toed into a nursing home for a snapshot of a sick senior citizen, which resulted in the arrests of several individuals, one of whom has since committed suicide, and three campaign workers got locked in the Hinds County Courthouse after hours. Since the June 24 runoff between state Sen. Chris McDaniel and U.S. Sen. Thad Cochran, the race has transcended the surreal tenor of the campaigns, raising questions about the need for election reform in the state.

Since the runoff, a handful of Mississippi citizens and a Texas-based conservative nonprofit, True the Vote, which trains and deploys poll watchers in key elections and has been accused of voter intimidation, filed a federal lawsuit against Republican Secretary of State Delbert Hosemann, the state GOP and several county election commissions arguing that the group was denied access to information that would help them look into possible irregularities in the runoff.

McDaniel himself, who now more than two weeks after losing to Cochran has still refused to concede the election, said the night of his defeat that his camp wanted to make sure the Republican primary was decided by Republicans, raising the specter that Democratic crossover voters tilted the scales in Cochran's favor. After a few weeks of campaign volunteers poring through records, he is expected to announce the campaign's findings July 16 in Jackson.

The nonstop barrage of allegations, made through press releases, public statements and in court documents, about vote buying, official misconduct and campaign-finance chicanery make this race a prime candidate for some sort of legislative triage.

But what, specifically, could the Mississippi Legislature do to address the issues that have come up? Some McDaniel supporters have suggested that Mississippi switch from an open-primary system that is open to all voters to a closed system where only declared partisans can participate.

State Sen. David Blount, D-Jackson, is the vice chairman of the Senate Elections Committee and a former assistant secretary of state (McDaniel is the committee's chairman), and said he "absolutely disagrees" with going to a closed primary system because strong political parties should welcome anyone who wants to vote in their primary.

"The basic idea is that the more voters we have the stronger we'll be," Blount said.

Turnout on June 24 surpassed the primary by more than 45,000 votes, or about 15 percent, which was unprecedented in a Senate runoff. The June 3 Republican primary saw 313,000 people participating. Blount said he plans to reintroduce legislation he has filed in past years to authorize Internet voter registration, early voting and Election Day registration.

With the implementation of the state's voter-ID law, which requires voters to show state-issued photo identification, Blount said there shouldn't be any issues with registering voters when they show up to the polls on Election Day.

Combating fraud was the central argument in favor of voter ID. State Sen. Joey Fillingane, R-Sumrall, who sponsored the 2011 ballot initiative to put voter ID to a statewide vote, said the primary proved false arguments from voter ID's detractors who said the requirement would suppress African American votes. On the other hand, voter ID opponents also noted that the requirement would do little to stop most kinds of voter fraud like as vote buying.

Such accusations emerged after the primary runoff when freelance journalist Charles C. Johnson, who writes for conservative media outlets, published a story on a website called GotNews.com that alleges the Cochran campaign used an African American pastor to pay black people $15 to vote. Cochran campaign officials told The Clarion-Ledger's Geoff Pender that the claims are "baseless and false," and the pastor has since backtracked to say that an individual approached him about paying for votes, but stopped short of saying that any tit-for-tat actually took place.

In response, the McDaniel campaign announced that it would offer $1,000 rewards for information leading to the arrest and conviction of anyone involved in the alleged scheme.

Democrats, such as Brandon Jones, executive director of the Mississippi Democratic Trust, said top Republican officials' rhetoric on voter ID does not align with their inaction on the fraud allegations oozing out of their own party primary.

"They're showing a lack of interest that make their claims about protecting the integrity of the vote ring hollow," Jones, a former lawmaker from the Mississippi Gulf Coast, told the Jackson Free Press.

In a statement to the media, Jones said Mississippians "were sold a package of voting laws by leaders who told us that their main concern was election integrity." In July 2009, Hosemann told The Neshoba Democrat that "[w]e need to continue to prosecute those who steal your vote," but he has not publicly weighed in on the allegations in True the Vote's complaint except to say that his office has no authority over county circuit clerks and party officials who certify primary results.

If the controversy involved Democrats, Jones believes, "we'd be having legislative hearings. Delbert Hosemann would be issuing press releases. It would be a media event."

As an example, he offers the 2013 Hattiesburg mayoral race between incumbent Johnny DuPree, a Democrat, and former Councilman Dave Ware, which wound up in court when Ware alleged fraud. In that case—Jones was one of DuPree's attorneys during that trial—a judge called for a new election and Hosemann's office and the U.S. Justice Department dispatched election monitors to the polls on Election Day.

Now, "statewide officials who have beat the drum for election protection (are) asleep at the wheel," Jones said.

Fillingane, who also sits on the Senate Elections Committee, said he has received calls from constituents asking for legislative action but said no such hearings have been scheduled, yet.

On the possibility of any new legislation, Blount offered a word of caution. "We need to make policy based on the future and not on one single close election," he said.