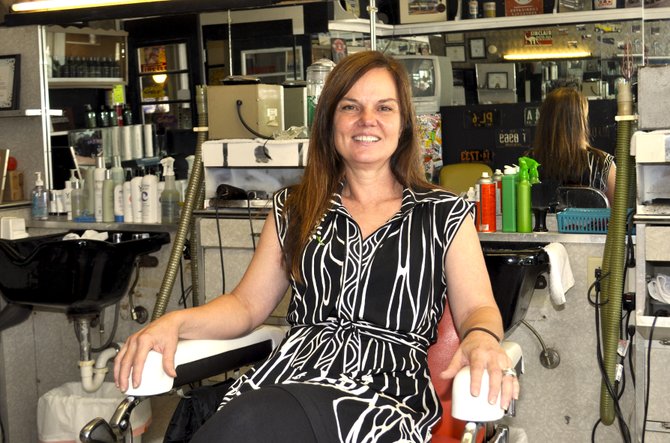 When setting up her shop, Elisa Acey kept the dying business of old-school barbershops in mind.

On a rainy day around Memorial Day in 2011, she went to Fondren to look for a location to open a salon. Her first stop was an empty building on Mitchell Avenue where the consignment shop Silly Billy's is now located.

While waiting for her husband, Stan, to arrive, she walked to Bob's Cut & Curl on State Street to inquire about renting the back of the shop for her salon. Bob Smith offered to sell Acey the entire business and go to work for her. She bought his 42-year-old barbershop and opened Acey Custom Hair Design, complete with a full-service salon in the back and a barbershop in the front.

The shop got its name because "Acey's" couldn't fit into the existing shop sign. "When 'The Help' came through, they put the (sign) up there, and it said Bob's," Acey says. "We liked the retro look, so we just left that."

The neighborhood gave Acey and her business a warm welcome. "I like Fondren a lot," she says. "You kind of feel like you're in a small town because everything's convenient, and people walk around."

She likes to keep her shop funky like the neighborhood. Car memorabilia line the walls of the barbershop, partially as an homage to her husband's love for cars—Stan owns Acey's High Performance Machine Shop (2825 Highway 80, 601-969-9400)—but also because of the nostalgia they evoke.

"Most people can associate something in their past (with a car)—their grandma or their first car or whatever," Acey says. "Cars are a common theme." Acey's daughter Kacy Whitty, 30, created the artwork in the salon. At the front of the salon is a long wall for shop patrons to sign their names.

Acey wants to cater to the students and the business district in the area. "We want people to think we're affordable, but not a go-and-get-your-hair-buzzed-off kind of shop. We'll give you what you want," she says.

She worked at Maurice's Barber & Style in Maywood Mart and Highland Village Concepts before opening her shop in September 2011. She and Stan have, in addition to Whitty, a son, Adam, 32, and two stepdaughters, Ronda, 29, and Holley, 25.

Shelly Burns, a former co-worker of Acey's from Maurice's, also works at the salon, and former owner Smith still works in the barbershop. Whitty does coloring at the salon.

My 10-year-old son calls Elisa "my personal barber." We love Acey's and what she has brought or rather kept in Fondren!