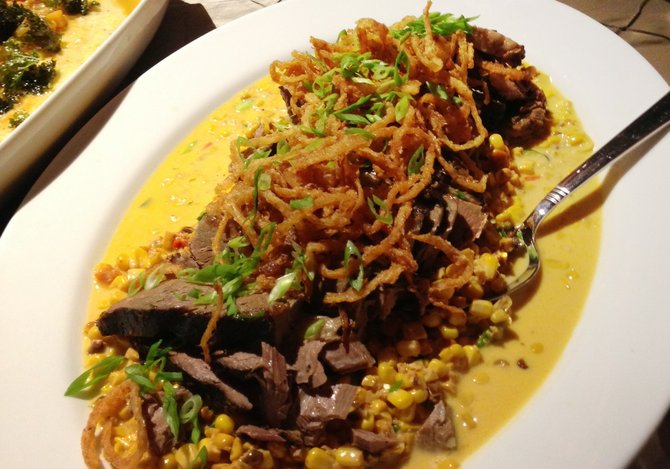 A pop-up dinner in honor of the late Craig Noone served as a reminder of all the good that Jacksonians can do together. Photo by Julie Skipper.

One of the things I love about Jackson is how often people who care about each other, and about this city, come together to support things bigger than themselves. We know the potential this place has, and we know that making it great takes everyone. But most of all, we know that when we do things together, it's also a lot of fun.

That spirit was fully on display Sept. 23 at Dinner 34, which will become an annual event supporting the Mississippi Hospitality and Restaurant Association's Craig Noone "Rock It Out" Memorial Scholarship, established in memory of restaurateur Craig Noone of Parlor Market, who died in 2011. The event name is a tribute to Noone—34 was his number in athletics—and an acknowledgment of the idea of teamwork.

When I first heard about the event, I spoke with Reynolds Boykin, Parlor Market's sous chef, who helped organize it along with Noone's friends Richard Patrick and Austin Evans of Cathead Vodka. It sounded like a perfect way to celebrate Noone's vision, life and legacy, and what the scholarship established in his memory will do for young people going forward.

The dinner included and recognized Conner Wolf, the first recipient of this two-year scholarship. A Jackson native with a lifelong passion for cooking, Wolf worked in the kitchen at Broad Street Bakery before following his dream to culinary school. He spent his first year of culinary studies at Mississippi University for Women's culinary arts program (the only culinary program in the state) before transferring to Le Cordon Bleu in Miami. Wolf returned to Jackson to help prep for and cook during the event. Boykin sees the inclusion of recipients of the scholarship in the evening as a way to grow the chef community and get people back here through the years.

If we're lucky, Wolf will return after graduation to launch what's sure to be a promising career here. During the dinner, he shared some of his ideas for items at a restaurant he'd like to open one day, including appetizers he called "Here, Mamas" in honor of small dishes he used to fix for his mother. He also talked about how grateful he was to be able to study at Le Cordon Bleu, getting exposure to great training and connections, and how he'd like to bring what he learns back home.

This year's Dinner 34 took place at the Robert E. Lee Building downtown, a location organizers chose because it's unique and rich with history and potential—yet is a place many folks may have never had a chance to see. The event location will change each year, but it will always be a space with a history and strong sense of place, in a nod to Noone's choice to open Parlor Market in its location on Capitol Street downtown.

The intimate evening, limited to 60 guests, reflected what Noone did with his restaurant, creating a setting that combined great food, talented people and a combination of innovation with nods to our past. Boykin described the menu as a mix of the old and new Parlor Markets, incorporating some of Noone's favorite signatures, like Craig's Fried Oyster Salad, along with dishes added lately.

Sitting among friends and family and taking in the beautiful architecture and views of downtown, I felt Dinner 34 celebrated perfectly what Noone saw for Jackson, and for all of us. His goal wasn't just opening a restaurant (or even several). It was about making Jackson great. To do that, he brought people together. In his staff, for events, and among his customers and friends, he cultivated and grew a community of people.

Noone, a good friend, also believed in investing in people in whom he saw a spark, a passion, a talent—and then he encouraged them, challenged them and gave them an opportunity to shine. He was always so proud of his sous chefs, line cooks, bartenders—everyone who was a contributing member of the team—and he pushed them to do amazing things.

That's why it's so fitting that his legacy lives on through the Rock It Out Scholarship and in promising young talent like Wolf. The scholarship will give someone an opportunity to follow a passion, to be challenged, to achieve great things ... and then, at Dinner 34, to come back to Jackson and be a part of something here, too.

Visit MSRA.org for more information or to apply for the Craig Noone "Rock It Out" Memorial Scholarship.