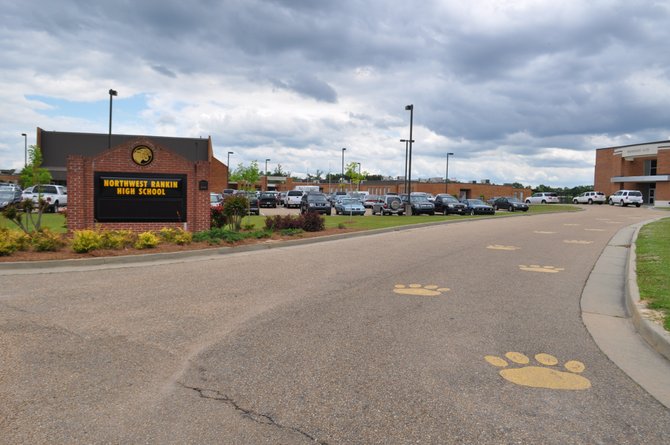 When liquor was illegal in Rankin County, the old saying used to go "No drankin' in Rankin." Now, the county might have to add: "No prayin'."

The complaint states that one student cried foul after the school held mandatory assemblies during school hours and on school grounds. Members of Pinelake Baptist Church allegedly held three meetings--one for seniors, one for juniors and one for sophomores--on April 9, April 10 and  April 22, respectively.

Frazier, principal at Northwest since fall of 2012, allegedly sent out an email on the day of the first meeting at 8:04 a.m., instructing faculty members to send students to a mandatory assembly in the Performing Arts Building. According to the complaint, the email read in full: "Sorry for the late notice. All seniors will need to report to the PAB (Performing Arts Building) during Cougar Connection. They should report directly from 5th block. Thanks."

The students were not informed of the nature of the assembly, just that attendance was required, they say. Once there, the complaining student said another student, who served as a representative of Pinelake Baptist Church, began a presentation about finding "hope" in "Jesus Christ."

The lawsuit states that after about a minute of introductory comments, the student, who was male, played a video that featured four young men it claimed once led troubled lives.

Students, who will remain anonymous because they are minors, said the young men in the video talked about an array of issues they had worked through, including pornography addiction, family issues, promiscuity and suicide. Eventually, the complaint states, each speaker eventually talked about "turning to Jesus Christ" and how that solved their problems. The first speaker "recommended that other people turn to Jesus Christ as well."

After the video, the assembly allegedly "turned into a full-blown lecture on the supposed miracles, powers and teachings of Jesus Christ and the church representative encouraged all students to find sanctity in him." The school's truancy officer, Jeff White, turned students who tried to leave the assembly away from the door.

Concluding the discussion, the students claim the church representative led the seniors in a Christian prayer, quoting Ephesians 1:7. One of the seniors at the assembly took video footage of the entire presentation and closing remarks.

The following day, the plaintiff, a 16-year-old 11th grader referred to in the lawsuit as M.B., attended an almost-identical assembly.

"I was forced to attend a Christian assembly that I was not comfortable with, and I was forced to do so by public school administration," she claims in the lawsuit.

On April 11, the AHA sent a letter to Frazier informing him the Christian assemblies were unconstitutional and asked that they be stopped immediately. The freshman and sophomore assemblies, scheduled for April 12, were postponed initially, but the school went ahead with the sophomore assembly on April 22.

Alexis Smith of Brandon, a friend of the NWR junior, filed the complaints against the school on behalf of the student. Smith, who could not be reached for comment, is a recent Northwest Rankin graduate.

"She is a member," said Bill Burgess, director of the AHA Legal Center. "She talked to her friend at the school and heard about what happened and asked us to help. We've been contacted by several other students, actually, since we filed suit."

The lawsuit seeks punitive damages and court fees, and asks for a declaratory judgment that "the decision to sponsor, present, promote and encourage or require attendance by school students at the Christian Assemblies violates the Establishment Clause of the First Amendment of the U.S. Constitution ..." and requests a permanent injunction "enjoining defendants, their successors and any person in active concert with the defendants, including Pinelake Baptist Church, from knowingly, intentionally or negligently presenting or allowing to be presented religious assemblies at any public schools."

This is the first lawsuit brought against a public school since March, when Mississippi Gov. Phil Bryant signed HB 638, which requires public schools to develop policies to allow students to pray over school intercoms, at assemblies and at sporting events. Similar bills have passed in South Carolina, Florida and Missouri since last year.

Correction: A previous version of this story misspelled the name of Bill Burgess, director of the AHA Legal Center. We apologize for the error.