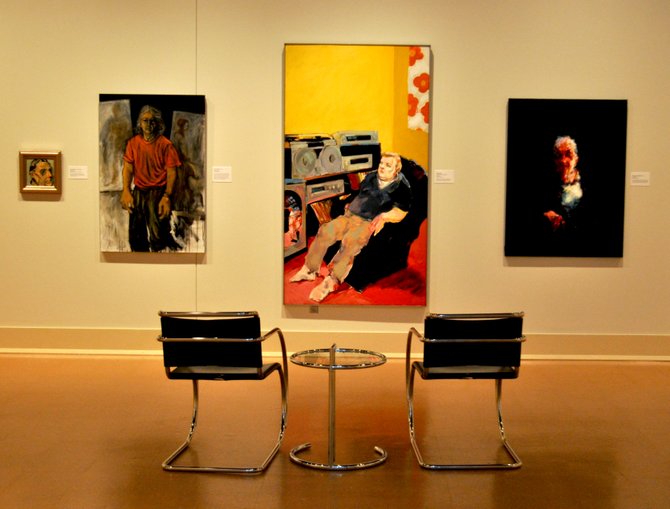 A tiny, Sharpie-drawn sketch on a white matchbook, no bigger than a shot glass, sits on a shelf. On another wall, a vivid jester-like face grins from atop a harlequin diamond backdrop on a larger-than-life canvas. Across the gallery hangs an oil painting so realistic it could almost be a photograph.

This is “Artists by Artists,” and what ties these disparate pieces of art together is that they are all portraits of Mississippi artists, painted or drawn or, in a few cases, sculpted by fellow artists. The show opened at the Mississippi Museum of Art in September and continues through mid-January.

David Lambert, curator of the show, has been working on “Artists by Artists” for almost two years. He says the idea struck when he was working in his studio and caught himself looking at two paintings of fellow artists.

“I thought, ‘You know, this means something to me.’ I know these people, and I respect their work, and I bet other artists around the state have similar things in their collections that people don’t see,” Lambert says. He began making some calls.

“I was really looking for, initially, things that artists had already done. Things that were tucked away, sketches, incidentals,” Lambert says. “My thought was that these are moments between artists, colleagues, friends that are very non-self-conscious. There’s no pressure of commission or exhibit or exhibition of these pieces. So I was really thrilled to find a lot of works that were done over the past 20 years.”

As Lambert began traveling the state, meeting artists and requesting works, he also found many artists eager to create something specifically for the show, as he got to know various art microcosms throughout Mississippi.

“This show can show you how the artist community really is connected, not just of people painting each other on their own, but the anecdotes revealing a little more flavor and texture about how they really are connected,” Lambert says.

The works submitted by P. Sanders McNeal are a good example of that sense of community. In the ’80s, she and several other artists in Jackson regularly got together once a month to do live figure drawings.

“We actually put an ad in the paper: Live drawing models needed. We had some 30, 40 people show up. Some of them didn’t know what live drawing meant,” McNeal says with a laugh. “All they saw was $10 an hour. … But when the models would not show up, we would draw each other. So I had some wonderful drawings of all my friends, and then I’d just throw them in the drawer, which is what (Lambert) saw. They’ve got coffee stains on them and stuff like that. I didn’t even remember I had them.”

“What was nice with those drawings was to see the artists 15 years younger, 20 years younger … We wanted the exhibit to be sort of a small portrait of the art community over a period of time, so it was really a nice addition,” Lambert adds.

William Goodman, one of the younger artists participating in the show, says the show gave his generation of local artists a similar chance to reflect on and celebrate the influence they’ve had on one another.

“It was roughly 2003 or so when I moved into the Fondren Corner building. Around that time, Ginger Williams moved in there and Josh Hailey. Jason Lott was there all the time,” Goodman says. “We had this special moment, this bond, a time where we saw each other’s creativity, and we really felt each other. And we’d stay up all night long and do photoshoots. It was just kind of a magical time. We’re still very good friends, but we all kind of do our own thing now. But it was one of those moments like you are talking about where, looking back on it, I think we all kind of grew from that time as a community.”

For the show, Goodman and Baxter Knowlton painted each other’s portraits. Ginger Williams Cook and Jason “Twiggy” Lott also painted portraits of each other for the show.

The exhibit features close to 75 pieces of art from 50 artists, mostly paintings with a few drawings and sculptures. There are no photographs, simply because Lambert says he had to set some arbitrary guidelines to keep the show from growing far too large. When the exhibit leaves the museum, it will continue on via its website, artistsbyartsists.com.

Correction: An earlier caption for the inline photo identified the painting of Jason "Twiggy" Lott as being of Baxter Knowlton. The Jackson Free Press apologizes for the error.

Your caption above is incorrect. The painting of Ginger Williams is by Jason Lott not Baxter Knowlton.