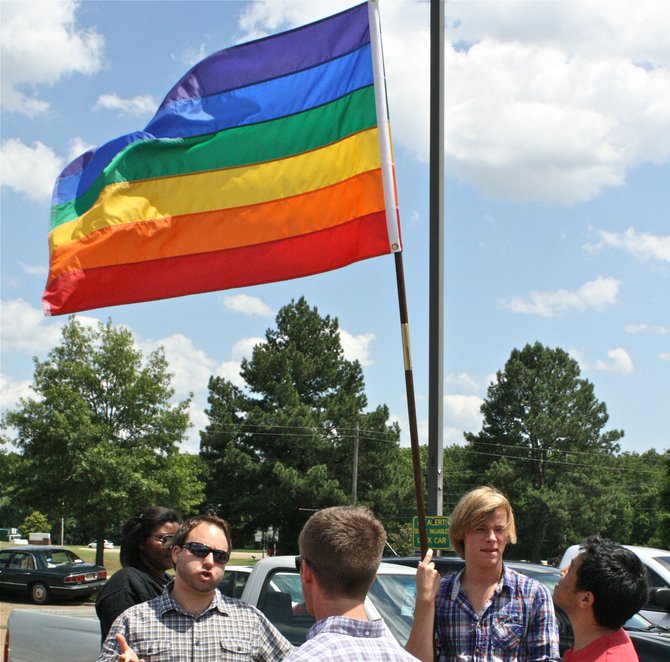 "Same-sex marriage may not be legally recognized in our state, as of yet, but it is not illegal to hold a wedding commitment ceremony," Clay Curry said Tuesday to about 20 supporters rallying at the Mississippi Agriculture and Forestry Museum.

Protestors gathered to present a petition to the Ag Museum that called for the state to allow same-sex couples to hold commitment ceremonies at the museum's facilities.

"Just because a gay couple cannot receive a state-issued marriage license, it does not mean that holding a service and calling it a wedding is against the law," Curry said. "All tax-paying citizens should have equal access to state-funded property to hold functions that obey the law. I am calling on the lawmakers in this state to address this problem and to prevent this outright bigotry from happening again by making it absolutely clear that it is not illegal for gay couples to have wedding ceremonies."

Curry created the petition, which had more than 1,300 signatures as of Tuesday afternoon, in response to a homosexual couple who tried to reserve a building on the grounds of the museum to hold a commitment ceremony. Museum representatives turned down the couple's request.

In 2009, Attorney General Jim Hood wrote an opinion regarding a similar request from another couple.

"We are of the opinion that the Department (of Agriculture and Commerce) is certainly authorized to restrict the use of museum property for events and functions that are legal under state law," Hood wrote. "Therefore, (the department) is authorized to prohibit same-gender marriages on museum property."

At the May 22 rally, Bob Gilchrist, who led two marches in Jackson in March and April for gay rights, said that he and fellow protestors are spreading the word that homosexuals are not second-class citizens. They deserve all equal rights, he said.

Gilchrist said he has learned that a lot of Mississippians are worried what their peers will think if they stand up for equal rights for the LGBT community.

"It (is) really sad how hopeless people are," Gilchrist said. "There's no need to be so hopeless. President (Barack) Obama said on May 9 that he supports gay marriage. The world is changing pretty fast. You can either jump on board and be on the right side of history, or you can just stand by, just like the people who stood by during the Civil Rights (Era) and look like an ass."

Some Mississippi entities are being shaken at the core right now. All I can say is to keep shaking. They will fight tooth and nail but at the end of the day, I think they realize now, they have already lost. They know this. While the protests are happening at the front door, a constituent came in the back door and threw their balance and control right out of the window. They can kick, holler and scream all the way to the courthouse. A handful of haters started it. The constituent is going to finish it. It's the law.

I may ruffle some feathers with this but it is what it is. Mississippi will eventually comply. They don't want to admit it, but they have no choice now.