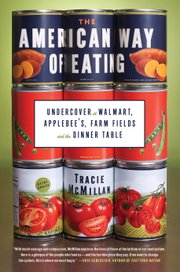 For a realistic view of food choices for the nation's poor, read "The American Way of Eating: Undercover at Walmart, Applebee's, Farm Fields and the Dinner Table" (Scribner, 2012, $25) by Tracie McMillan.

News reports of late have attempted to debunk the existence of "food deserts"—areas of the country where there is no easy availability of fresh fruits and vegetables.

Within a couple of miles of almost any urban neighborhood, "you can get basically any type of food," said Roland Sturm of the RAND Corp., lead author of one of two studies that appear to contradict the food-desert theory, The New York Times reports.

The studies seem to fuel conservative sentiments, as the Times puts it, challenging "an article of faith among some policy makers and advocates," including first lady Michelle Obama, who has led the charge for fresh fruits and vegetables for children in schools.

The misplaced conviction that perhaps there aren't any food deserts, after all, seems a bit off-putting. As in: Does this mean that inner cities are actually teeming with fresh fruits and vegetables? That poor people who struggle with obesity are actually, in fact, responsible for their plight? That the Obama White House is nothing but a fraud when it comes to concern for the poor and healthy choices? You get the drift.

The method used to come up with this anti-food desert theory isn't an actual polling or investigation of food outlets. Instead, it uses U.S. Census information to determine the number of fast-food restaurants and convenience stores in low-income neighborhoods.

Guess what? Poor neighborhoods had nearly twice as many of these establishments as wealthier ones, thus, supposedly, disproving the "food desert" theory. But what about the food quality? Can anyone with a straight face claim that fast food is healthy, nutritious food? Laden with salt, fats and sugar, it's the antithesis of quality food. Does the abundance of cheap, unhealthy food negate the reality of food deserts? Hardly.

Moreover, the studies did not define the quality or the price of produce offerings at the convenience stores they claim dispute the food-desert theory. When the convenience store's jacked-up price of an apple costs an hour's labor in minimum wage take-home pay, does that mean that there's plenty of fresh fruit and vegetables? Or are the available offerings old, wilted and rancid, as is often the case?

A more realistic, firsthand view of food available in inner cities would note the widespread availability of rancid food, outdated products (including cereals infested with weevils), dented cans, "seconds," even opened products cast off from food chains, ending up on the dusty shelves of discount food stores. Perhaps food desert isn't such an apt term as polluted oasis. Sure, there's plenty of "food" there, but it's poisonous.

Foods that cause diabetes, obesity, and cardiovascular and other diseases are abundant in impoverished areas. Just as troubling is the absence of healthy, nutritious, affordable fruits and vegetables that separates people from life.

That's the real killer in food deserts—attacking not only the body but mind and spirit, as well. It sends the message that one's economic standing is the only measure of worth that counts—that lower-income people are worthless, or less deserving of quality food and quality life. It's a message that gnaws at one's integrity and self-esteem as achingly at hunger itself.

It's compounded by the fact that many of those who live in poor neighborhoods are minorities bombarded with pop culture idealizing the thin, white and rich. What's a person of color living amid bad food in poor circumstances to think? That it's unattainable, and I am worthless?

Providing substandard food for poor people is both a way of life—and death—in America. Maybe America needs a "Black Like Me" for food to wake up the status quo. We are engendering spiritual hunger in a generation. As Nobel Laureate and Holocaust survivor Elie Wiesel observed, it's not hate, but indifference that is the epitome of evil.

For people to mock the poor—and the sincere efforts to recognize their legitimate need and provide good, fair, healthy food in impoverished areas—feeds that evil.