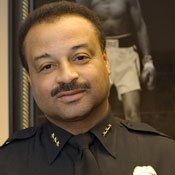 Last January, a $255,000 ring disappeared from Juniker Jewelry Co. with the help of a thief who had a car waiting outside. This morning, Jackson Police Department Sgt. Ralph Lundstrom said police now have a suspect.

"We got a call from the Portland, Ore., police department on a subject they arrested in a grand larceny of a jewelry store. The guy they questioned is going to be arraigned in Florida, but Mississippi also came up," Lundstrom told JPD management at this morning's weekly COMSTAT meeting. "They contacted us. Detective (Tonia) Williams remembered working a case at Juniker Jewelers back in 2010. She pulled her stuff up on that, contacted Portland, and they've been talking the last couple of days."

Oregon police arrested Jack Cannon for a theft there and connected him to the Juniker robbery, thanks to photos Jackson police gathered from the jewelry store and pictures of the suspect's vehicle and tag records.

Oregon police arrested not only Cannon but also "several other" suspects, possibly as many as 10.

"This is a multi-state ring, we think. They hit in Florida and several different places," said Lundstrom, adding that he believed the suspect--after facing several of his own clearly-detailed photos taken in Jackson--is "probably spilling his guts on his compadres and where all they've been working."

Lundstrom advised jewelry sellers to refuse would-be buyers permission to handle their more expensive merchandise without first securing doors and exits. "I don't know if I'd own a jewelry store where I'd hand you a quarter of a million dollar ring and not lock the door. I reckon most jewelers do that now," he said.

Major crime is down slightly this year, with 4,597 total incidents to date, compared to 4,890 reported incidents last May.