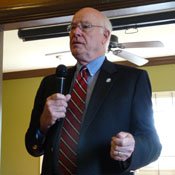 The University of Mississippi Medical Center is increasing its research capabilities and expansion, UMMC Vice Chancellor Dr. James Keeton said at a community forum this morning.

Speaking at Koinonia Coffee House's Friday Forum, Keeton spoke about the medical schools' economic impact--not just for Jackson, but the entire state--of $2.1 billion annually. He said that over the past two decades the medical center has worked to change its image from a charity hospital to the city's largest economic engine. UMMC reports that it generates 17,164 jobs annually

This past year, UMMC's research budget grew from $60.9 million to $75.7 million. Last July, UMMC received a $9 million grant from the National Institutes of Health to study the risk factors for Alzheimer's disease. Last fall, UMMC and the Greater Jackson Chamber Partnership hosted the inaugural 2010 Global Obesity Summit at the Jackson Convention Complex, where the medical center announced plans for a Obesity, Metabolism and Nutrition Center that will research the causes of obesity, including hormonal, metabolic and genetic factors. The research center is made possible through outside grants and a $2 million endowment from Joe Sanderson Jr. of the Sanderson Farms chicken company. Keeton said the medical center received $75 million for research last year through various sponsors, and he would like to see that amount increase to $100 million.

Keeton said today that the obesity research center is almost complete, and the university is in the process of hiring a director.

"We have to fix obesity here, and in particular the Mississippi Delta," Keeton said.

Keeton said that UMMC has plans to partner with Brown Elementary School in the midtown neighborhood to form the same program there.

"We want to have health-care grammar schools across the entire state," he said. "But Brown is going to happen, and we hope to have it going next year."

UMMC's future plans also include the expansion of Blair E. Batson Hospital for Children, new roadways through the campus, and building a hotel for cancer patients undergoing treatment.