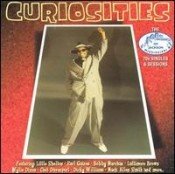 Released in 2000, "Curiosities" is a two-disc CD of Ace Records' music.

Ace was a major player in developing New Orleans R&B and blues, and Vincent was among early rock 'n' roll's more colorful characters. One of the most famous artists Ace recorded was Huey "Piano" Smith & His Clowns who recorded "Rockin' Pneumonia and Boogie Woogie Flu."

"When you review the famous names that came through Mississippi and Ace Records in particular, you get a better understanding of how Mississippi earned the name 'The Birthplace of America's Music,'" Gov. Haley Barbour said in a release.

In the 1960s, the bankruptcy of Vee-Jay Records, an Ace partner, forced Ace Records to temporarily shut down. Vincent revived Ace in 1971, recording local Jackson bluesmen such as Sam Myers and King Edward, until London-based Demon Music Group bought the label in 1997.

Today's ceremony will take place on the corner of West Capitol and Roach streets, the site of Ace Records' former headquarters, at 3:30 p.m.