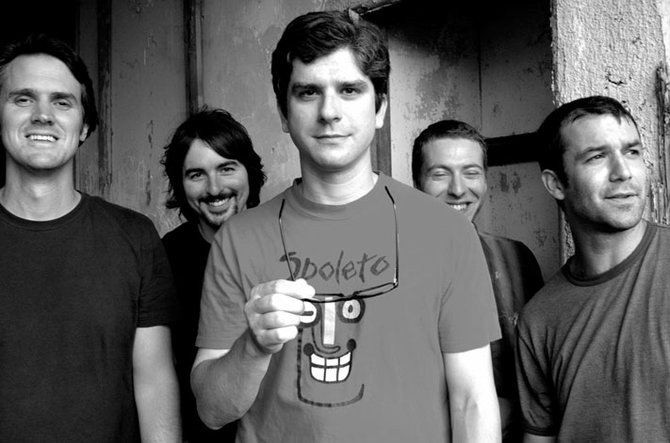 It's central Mississippi's biggest outdoor music festival, Jubilee!JAM this Friday and Saturday. Read all the details in this issue about some of the bands. Advance tickets are available at Be-Bop Records , the coliseum box office or Ticketmaster.com; $23 each day/$40 for the two-day pass. At the gate it will be $28 each day/$50 for a two-day pass. Make it a Father's Day musical event weekend. You can bring in folding chairs, but you can't set them near the front of the stage area. For a schedule and more info, go to Jubilee Jam Website.

Every downtown club will have options for you if you need to escape JAM for a bit. Hal & Mal's, Martin's, 930 Blues Café and Fenian's will be open day and night, while "after JAM" parties will broaden your options to Gators/105 Capital and Club Fire. Friday will be a old-time-bluegrass vibe with Brooks and Baker at Hal & Mal's and the Mayhem String Band at Martin's.

The '80s tribute party band Molly Ringwalds will return to Club Fire on Friday. Roots/Juke rockers the Scott Albert Johnson Band will have a free show Friday at Fenian's. Southern rock favorites Electric Mudd are at Martin's on Saturday.

There is a lot going on downtown and beyond this Thursday before Jubilee!JAM. Tickets are still available at Be-Bop for B.B. King at the Vicksburg Convention Center this Thursday night, June 12. Also Thursday, Martin's will host the return of New Orleans catchy Elephant-6 style, indie-psych-rock outfit Rotary Downs on their way up I-55 to Bonnaroo. They won over a lot of fans at Voodoo Fest last year, so see this top-notch show before they outgrow Martin's. Sample their tunes at rotarydowns.com. Opening for Rotary Downs is local favorite Johnny Bertram performing with a full band. Hal & Mal's is hosting the Atlanta-based hip-hop/alt.rock outfit, Rehab, this Thursday night for your party pleasures.

Other shows worth considering this week are AutoVaughn and the Jason Turner Band at Fire this Sunday night. In fact, Fire has quite a few top-quality rock shows in the coming month. Check our online music listings to plan your next few weekends and plot your calendar.

Next Tuesday, June 17, check out the Off-Kilter Comedy Improv troupe at Fenian's from 9 p.m.-1 a.m. The group is hilarious, and there is no better way to decompress your stress than laughing your ass off to the point of becoming oxygen depraved and passing out. And, of course, it is at Fenian's so you can drink to your preferred level of depravity and enjoy the "audience participation encouraged" improv skit comedy.

If the heat has you running for the coast, Merle Haggard is at Beau Rivage next Sunday, June 22. There are still seats available for Ringo Starr at Beau Rivage July 5 for $75-$100. You can check out the WCPR Alt.Rock music fest at the Biloxi fairgrounds during the day, prior to Ringo, with POD, Puddle of Mudd, Shinedown, 10 Years, Toadies, Tantric, Stereohype and Saving Abel. Tom Waits will perform at the Alabama Theatre in Birmingham on July 3. Robert Plant and Alison Krauss are at Mud Island, Memphis, July 8. Bauhaus front man Peter Murphy returns to the Crescent City, July 9.